Here's the first unit of bill using the new Tudor Dollies, based and ready for action in the retinue of Lord Thomas Stanley, 2nd Earl of Derby (1485-1521).

You can see some individual photographs of the figures in the previous post but they certainly are a sight as a unit.

I made a point of having a few figures without coats for difference and to break the unit up a little, you'll also notice one of the fine Steel Fist Knights in Maximilian Armour leading the unit. So a bit of a mix of figures but they all look good together I think.

As the unit is essentially uniformed I spent a bit of extra time on the faces and elements of difference, the livery badges in particular have worked really well for a relatively small detail. 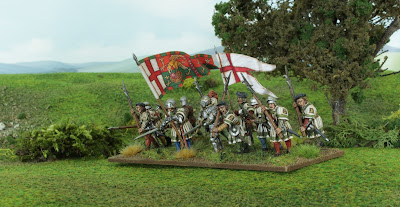 The final figure that I assembled was the standard bearer and I was quite pleased with the way it turned out, I can't decide if he looks to be leading the unit on or dressing the line but it's worked rather well. The top of the coat has a shirt collar sculpted but just as easily looks like the top of a gorget when painted in silver so the armoured arms don't look out of place.

This and the other banner in the unit are both from Pete's Flags and very nice they are too, I hope to convince him to make more one day.

This was one of two Stanley banners to be used in 1513 as whilst Thomas carried this banner in France he was also required to raise troops (6500) for battle of Flodden serving under his Uncle, Edward Stanley and for this he was given permission to allow Edward to carry a duplicate. So you could say I've also created my first unit for a Flodden Army - I've really got to even up the balance with some French before I think about that.

For the French campaign Thomas raised a retinue of 511 which marched in the Foreward under the Earl of Shrewsbury. Of that number were some demilancers though I have been unable to ascertain exactly how many. From the brief information I have found it appears he perhaps fought on foot as well as mounted as he is mentioned as being present at the Battle of the Spurs and was also commended for his bravery at the sieges of Therouanne and Tournai so I guess he was in the thick of it, either that or keen to be noticed. 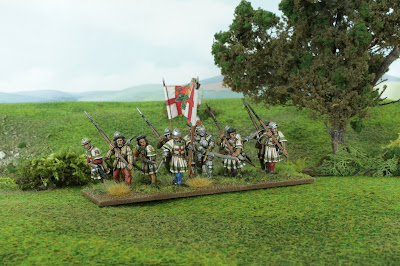 For the moment this represents the last of the dolly posts and normal service shall resume shortly. If you'd like to get your hands on some there's still time to add to the order which I'll be putting in on 1 June, thereafter I'll eventually stock them but you may have to wait. Just send me an email (stum_23@hotmail.com) and I'll let you know of the cost and postage etc.

I've got a few things on the go painting wise so lots to come in the next few weeks hopefully and I'll also playtest the Lion Rampant amendments a bit more with a view to publishing them here so hopefully not too long a wait on those too if you're interested.