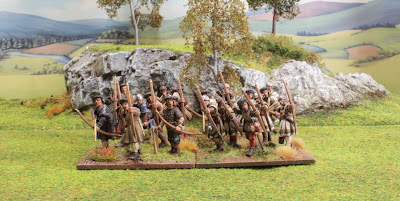 Under the current circumstances I find myself with some additional time so I thought I'd embark on a long overdue project for my early Tudor Army.

Oli Green and I wargame the period using adapted rules and army listings from Lion Rampant for which we have split longbowmen into two categories;

These troop types often feature side by side in most of our games but up until now my collection only featured men in livery coats with no obvious difference which can occasionally cause confusion.

In the early sixteenth century Tudor armies were built around a core of infantry armed with bow and bill. Their organisation in principle did not differ that much from the late fifteenth century in that they were either paid professional soldiers or men from county militias liable for military service. 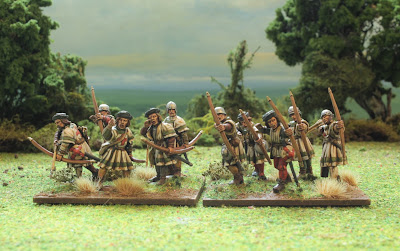 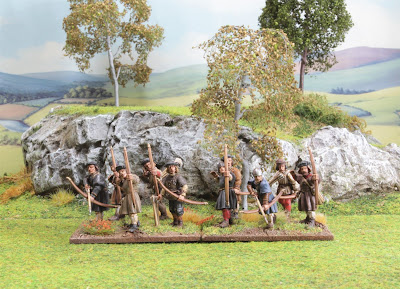 The former category represents men who could be found in the garrisons of the Calais pale as well as at Berwick and some of the border fortresses. The latter represents those raised on a short term basis in time of conflict and/or for local defence.

The rules were lifted with a minor alteration from Lion Rampant. In early testing we found that expert archers shooting on a 4+ did not represent what archers were becoming in the period so we decided to reflect their better experience and ability by removing the -1 consideration at long range.

My main focus when creating the unit was to make the figures visibly different and slightly less equipped in appearance. I did this by representing most without armour and all without livery. I also made the decision not to have them with a banner or commander to make them a bit more versatile. In this way they could be used as English, Rebels, Lowland Scots and potentially French or Breton troops

Most were converted by sculpting coats on to Perry WOTR figures as per this example from a previous unit; 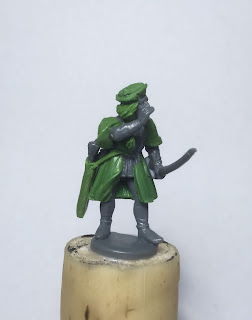 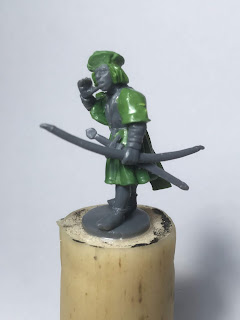 An easier conversion can be achieved by using the Tudor Dollies from Steel Fist Miniatures with Perry arms to which you can add sculpted sleeves but you can also saw off and swap the legs which achieves futher variety.

Tudor dollies with Perry arms and heads, the two on the right have leg swaps

Brigandines and padded Jacks were still in use in this period and with suitable heads these Perry WOTR figures make for convincing early Tudors. 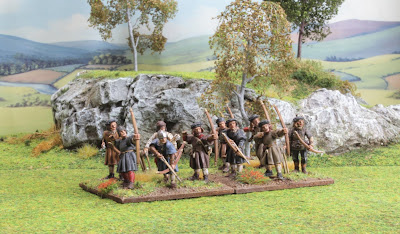 From a visual perspective they also make for quite a convincing larger body when intermingled with figures in livery. Here's a couple of mock ups somewhere in the borders;

a mixed host of archers

I also painted a casualty marker for the unit using a Perry Zulu as a dolly to sculpt upon; 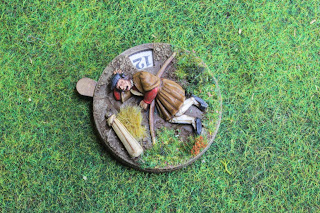 I painted the figures in muted colours to reflect typical common clothing at the time;

I found Tawny to be a bit of a challenge, it's a brownish orange but it took a couple of attempts to get it to look right.

For more information on this subject I thoroughly recommend The King's Servants book by The Tudor Tailor, it's a good source for an understanding of how Tudor men were dressed at the start of the 16c 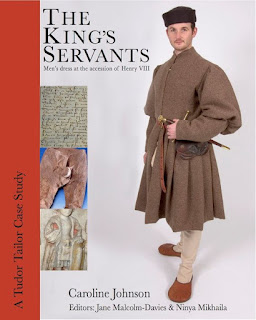 I've really enjoyed putting this unit together, it's most definitely been a welcome distraction. I particularly enjoyed reading about typical clothing and interpreting that through working with a muted palette.

While the mood takes me it seems a natural progression to do some Shire bill in a similar fashion. I think I'd quite like to do a similarly attired command to go with them as well. The relative versatility of the unit and doing these border set ups also has me rather tempted to do one with a Scots banner, we'll just have to see.

Bye for now and take care