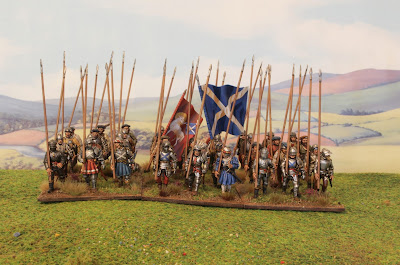 I've put off creating a Scots army for quite a while as the numbers of pike simply put me off but with the circumstances of this year it really was a perfect opportunity to quietly push on with a large project. Every figure a small victory for the day in creating something and having progress, it really helped my mindset a lot especially when restrictions were particularly tight and the nights were drawing in.

Special thanks to Michael Perry for donating the figures, it was a great boost and gave the momentum to achieve something.

With 2 boxes of plastic Mercenaries to convert the target was to create a block of 36 pikemen, in particular Scots Lowland pike raised from the borders and towns of the Kingdom suitable for the period 1513-1530.

This covers the 1513 campaign of James IV followed by regency under the Duke of Albany.

In terms of appearance with the exception of the Highlands the Scots looked fairly similar to their English counterparts but unlike the English who were paid for their service the Scots employed a two tier system. 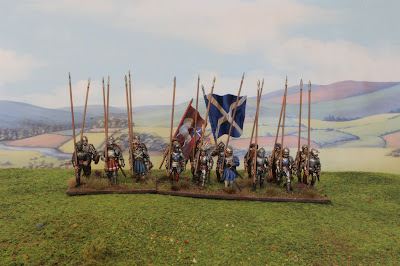 The best equipped men were sourced from and equipped under a retinue system. They came from the households and clans of the leading nobility, these saw service along the border, in raids into Northern England and in the faction warfare that developed following the death of James IV. 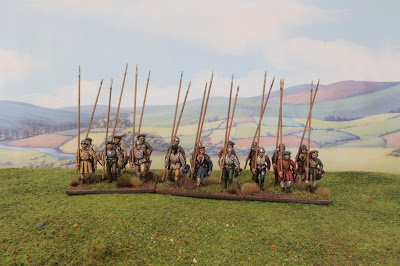 The remaining bulk of a Scots field army were men raised under the levy system which in principle required every man aged 16-60 to serve the crown for 40 days in any one year during times of national emergency. They were required to muster with their own equipment and food for anything up to the full 40 days. Their appearance would be fairly rudimentary and with relatively little or no armour.

Sources for the arms and equipment are listed in the following;

With that brief in mind here are some work in progress photographs which show some of the conversions with green stuff and assemblies. 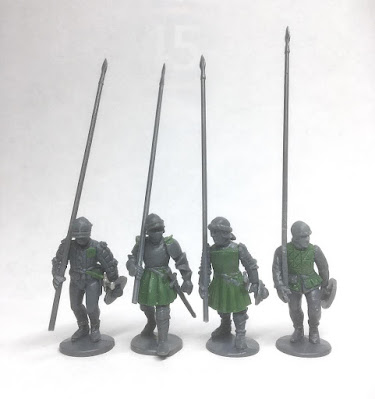 Simple through to more detailed conversions working left to right; 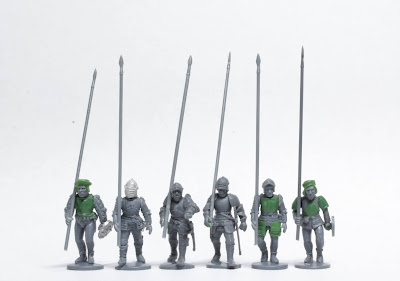 More examples of assembly conversions from the foot knights set along with another 16c breastplate and more ambitious almain rivet with tassets.
The metal head with bellows visor is from a set of Steel Fist armoured landsknechts. The two bare heads with caps added are from the Perry Ansar set. 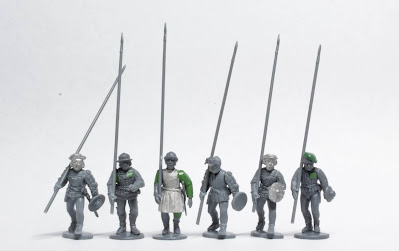 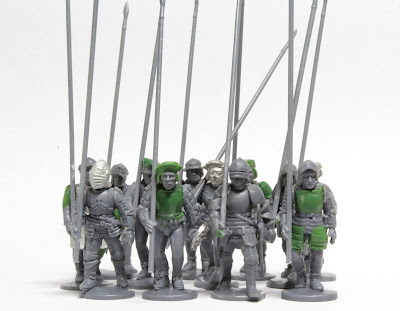 All of the above mixed together prior to painting, they're starting to look convincing. 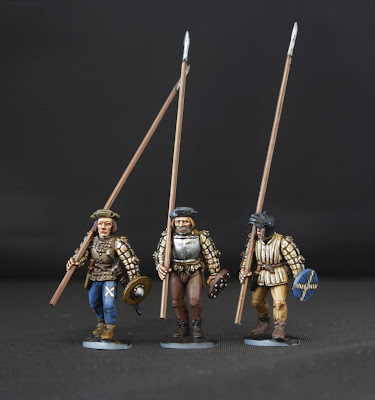 A closer look at some of the figures in padded jacks. The muted palette really makes the faces pop. The figure on the right has a blackened old bascinet, this was created by adding a visor from the Agincourt knights sprue to a head with an open sallet from the Mercenaries set. 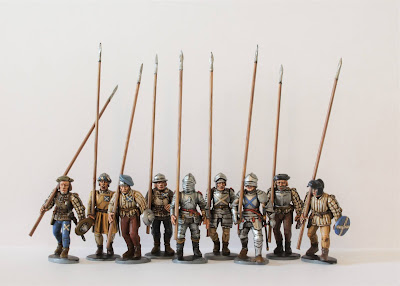 Painted up, the conversion work really pays off 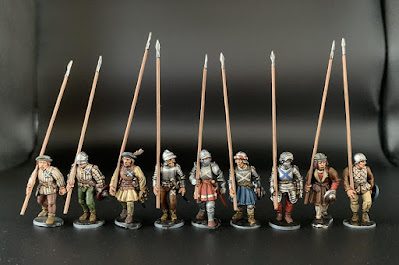 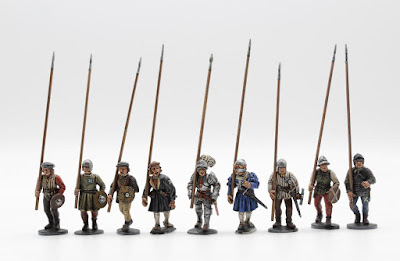 Another batch ready to go
Hopefully you can now spot the conversion and assembly choices. The 3 central figures are a converted Footknight with plumes from Steel Fist added, he is flanked by two figures using the Steel Fist Tudor dollies.
The figure to the left of the nobleman wears a coat with pike arms added straight from the box and a Perry Tudor head. The one on the right is a French Captain, same process only I added slashing to the sleeves with GS. 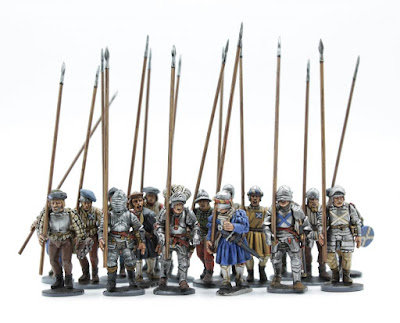 A group shot about halfway through the project.
All of the above shows the assembly, conversion and painting process that I have applied to the unit the goal being to create a pike block with an appearance as I consider the Scots may have looked like, the formula being roughly as follows;
Here you can see that in practice; 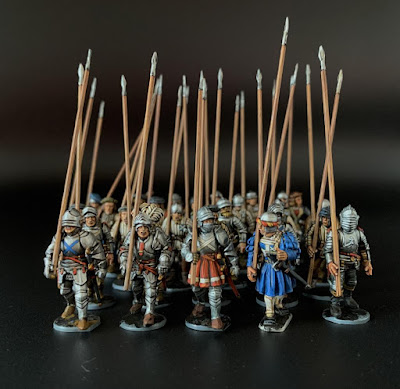 From the front, the imposing armoured spearpoint of the unit is clear to see. 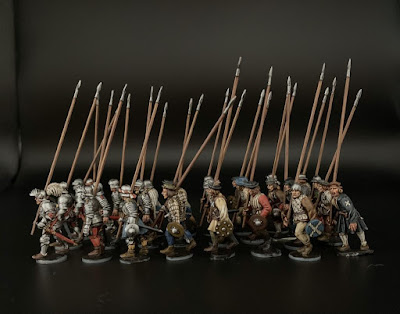 From the side you can really appreciate the composition of the unit. They're now ready to be based. 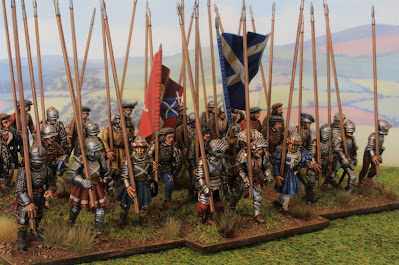 An early decision was to build this unit as a basis to add more which is why I opted for the 2 simple banners. I did not want to commit to specific commanders or liveries, these will come later and I can add single bases with flags of particular nobles as I see fit and be able to create large or small pike blocks for relatively little effort.
The choice of nobles will be key as quite a few were killed at Flodden so I will go for those who survived and played a part in Anglo Scots clashes of the period such as the Kerrs and Homes.
The two flags I went for were the Saltire of Scotland and The Lamb of God. The former was an obvious choice and simply needed to be done. Thereafter it was a case of finding something both generic and interesting. From the sources mentioned at the start religious iconography is a prominent feature for Scots banners, those most frequently mentioned are the Virgin, St. Margaret and the Lamb of God. 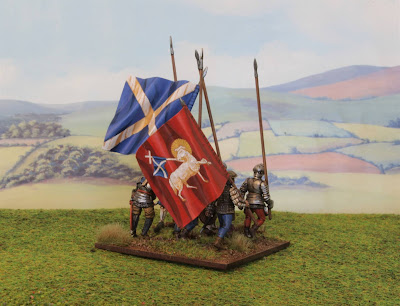 Troops from Perth marched under the Holy Lamb which features in the arms of the town granted in 1378. I really liked the palette and imagery on this so I used it as a basis for the flag. 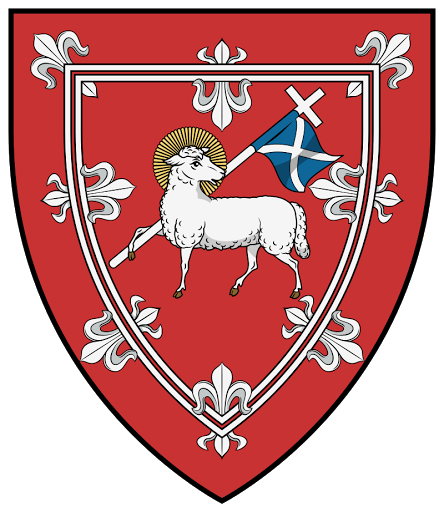 I also used a new toy to create this banner, a £20 A4 LED lightbox, a great piece of kit. It was simply a matter of copying the lamb from this illustration and flipping it for the mirror image. Compared to hours on Photoshop it's a great addition to the arsenal if you want to create your own banners.
The next task was to create a casualty marker, here's a chap who fell foul of an English billhook. It was created from a Steel Fist Tudor dolly, Perry Ansar legs and arms from the Mercenaries and Light Cavalry set. 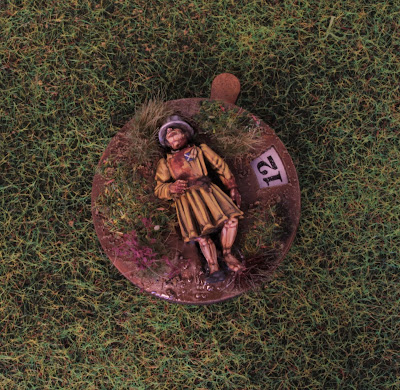 As I had everything set up for photography I thought i'd have a bit of fun creating the moments prior to a clash of arms from both the English and Scots perspective. 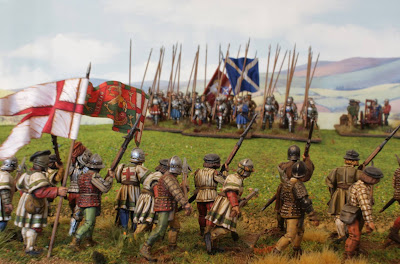 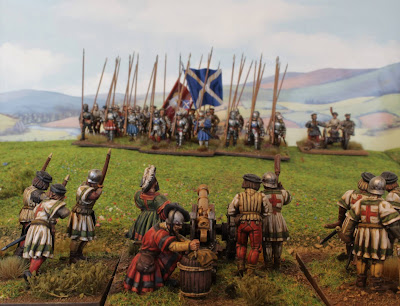 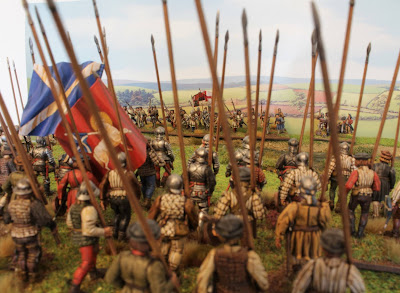 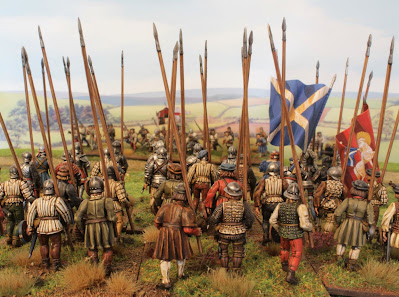 I hope you enjoyed this, I already have some more pikemen waiting to be painted so I guess this was just the first instalment.
Bye for now and all the best
Stuart
Posted by Stuart at 07:12