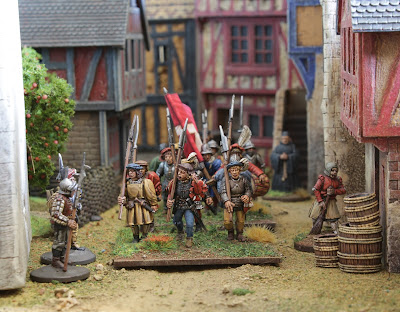 My focus has returned to my French army of 1513 with the creation of this unit of franc archers with polearms. They're all converted from a mix of Perry and Steel Fist miniatures along with a few extra bits of kit added from the plastic Warlord Landsknechts. 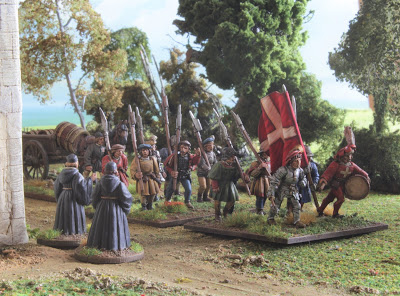 
Franc archers, meaning free archers (in that their service exempted them from land tax) were locally raised territorial troops with an average age of around 32, they were something of a 'home guard' force.

They were originally created in 1448 as a standing force of regular infantry and the last notable occasion where they fought in any great number was at the Battle of Guinegate (a few miles from Therouanne) in 1479, after which a period of relative decline began. Sources get confusing at this point as they begin to get reorganised, suppressed and re-raised. To bring us up to date, after this relative hiatus 22000 were raised for frontier defence in May 1513, these were organised in 44 ensigns of 500 men each and stayed in being for 18 months. I'm convinced that the French defenders of Therouanne and some of the relief army must have been part of this decree.

Despite the name the armament of the franc archer in the early sixteenth century was very much reflective of the early renaissance; whereas previously they had been required to serve with brigandine, sallet,and predominantly bow and crossbow (though pike had been tried on the Swiss model in the late 1470's / 1480's) a decree of January 1522 required a levy of 24000 francs archers for campaigns in Italy, Guyenne and Picardy (the latter for a second invasion by Henry) to be equipped with , doublets, feathers, leather cape, shoes, corselets, mail gorgets, arm pieces, mail skirts and helmets. 2/3 were armed with pike and the rest were halberdiers, crossbowmen and arquebusiers. All were to serve in hoquetons (sleeveless coats) in the liveries of their captains and or towns / cities. They were paid month by month and stood down at the end of a campaign. 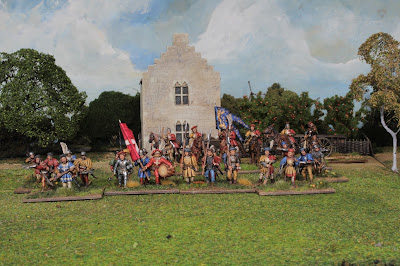 Franc archer halberdiers supported by crossbowmen, arquebusiers and ordonnance archers* the missile foot feature some livery coats, I think I may do the next unit all in livery coats with a captain as a nod to the above.

*confusing isn't it !ordonnance archers were the lightest combatant part of a cavalry lance, they began the 16c as mounted archers moving to lance armed medium cavalry from about 1515-25 on. If you'd like to see more of them I covered them in this blog post.

Based upon the equipment described up to 1490 and from 1522 (I have been unable to find anything for the 1513 muster) as well as descriptions of the skirmishing during the siege of Therouanne I have opted for a mid point for the French infantry in my collection to be 1/3 pike / polearms and the remainder missile armed. Here's the franc archer infantry in my army alongside some supporting field guns, some more missile foot are needed to even up the balance a bit. 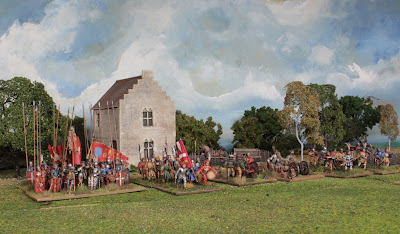 It is also worth mentioning another staple of the French infantry; the adventurier. These were less disciplined, predominantly crossbow and arquebus armed infantry, the term adventurier meaning equally foot soldier and pillager.

These were more specifically raised for the Italian campaigns though Picardy was a recruiting region with recurring captains such as Bournonville, Sercus and Heilly becoming commonplace beginning a semi permanent formation soon referred to as the ‘bands of Picardy’ which would soon become known as the 'old bands of Picardy' during the reign of Francis I.

Various wargaming army lists seem to confuse the franc archer and adventurier both in terms of armament and ability; in the case of the former they tend to be deemed as ineffectual with their performance at Guinegate crystallising that notion; the battle was partly lost due to them turning their attention to Maximilian's baggage train but prior to this they defeated their opposite number of Burgundian and English archers, captured the Burgundian artillery and began firing into their flank with it - not bad going.


For my focus of interest the defenders of Therouanne are noted to have been tenacious, well led and determined. No doubt this has something to do with being besieged rather than any real test of open warfare but could this perhaps also reflect that Picardy was a frontier region with its franc archers having more experience than their comrades in other parts of France.

The principal inspiration for the figures in this unit came from my recent discovery of the illuminated manuscript 'Treatise on the art of war' by Berault Stuart, seigneur d'Aubigny. 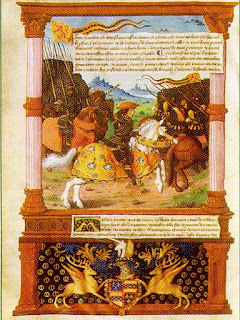 Berault Stuart (note this painting is not from the book)

Berault Stuart 1452-1508 was a French soldier and later commander of the French royal bodyguard Garde Ecossaise. His military career includes leading the French mercenaries in the Lancastrian army at Bosworth and service in the early Italian wars at the battles of Fornovo and Seminara.

In 1508 he dictated his Treatise on the art of war, a brief practical discourse on warfare drawing upon contemporary works and his own military experience. In 1525 illuminated copies were created which include images of French and Swiss soldiers, here's a couple of the paintings from it; 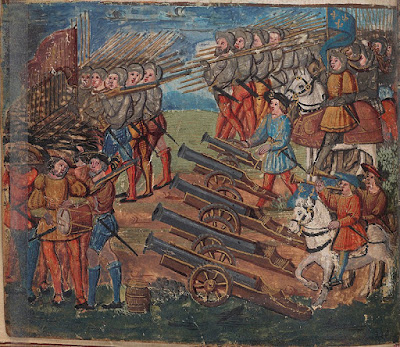 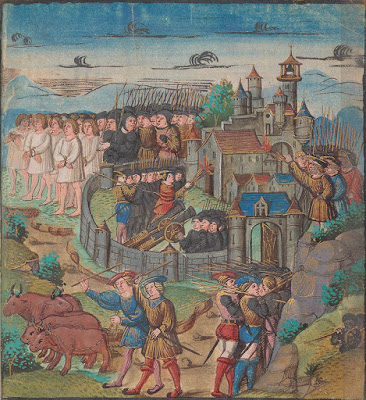 The main distinguishing feature of the French soldiers in this source are their cloth caps and coats of various colours and styles. This prompted me to review some more contemporary French sources for further inspiration; 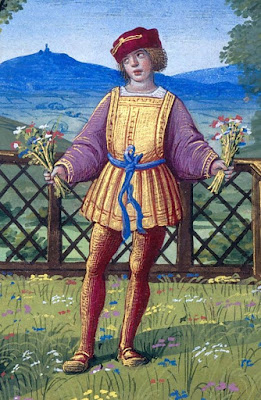 From a c.1500 book of hours made for Henry VIII with paintings by a French artist. The figure wears a hocqueton - a sleeveless skirted coat. The 1522 decree required that all franc archers wear a hocqueton in the livery of their commander. 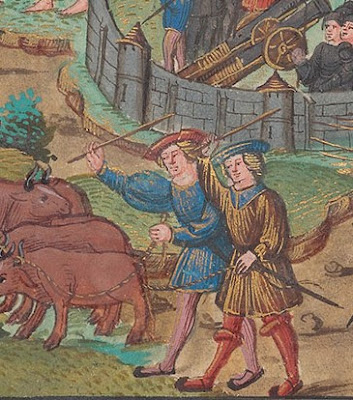 Detail from the traite d'guerre the men are wearing coats rather than hocquetons, note the difference in sleeves on each figure. It appears that these may be their own rather than livery coats as per the next example; 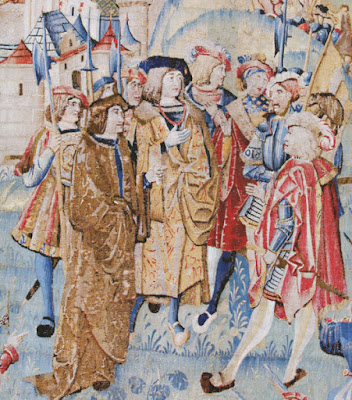 Detail from a tapestry depicting the 1513 siege of Dijon. In this scene Louis II de la Tremoille flanked by his personal guard wearing livery coats with his wheel badge on the breast is negotiating the surrender of the town to the Swiss. 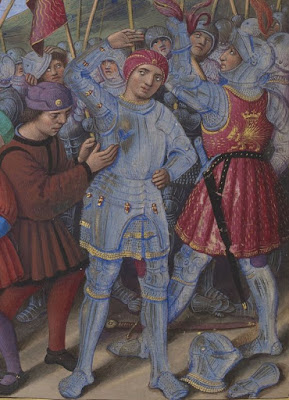 Detail from a series of paintings depicting Louis XII's invasion of Genoa in 1508 , the figure arming the knight wears a simple coat with puffed sleeves. 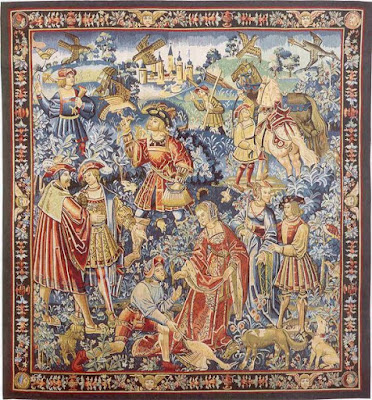 With the art of war paintings as my primary source here's my interpretation in miniature; 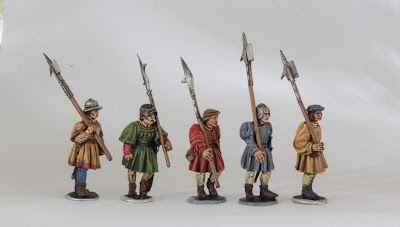 They all wear coats of various styles, left to right the first figure wears a red and yellow short sleeved livery coat with the cross of St.Denis on the chest. This was converted from a marching Perry WOTR figure.

The second figure was also converted from a marching Perry WOTR figure in the same way but has a plain coat, slashed on the chest with puffed sleeves gathered above the elbow. Both of these were quite quick conversions. I really like the blackened sallet on this one.

For comparison here are some marching archers from the same range converted as Tudors in livery coats;

The third figure has a plain coat with voluminous sleeves slashed between elbow and wrist. This was converted from a Perry WOTR plastic figure with a metal Tudor head from the same range.

The fourth figure has sleeves puffed at the shoulder, this was also converted from a Perry plastic WOTR soldier.

The final figure has a coat with voluminous sleeves, this was converted using one of my Tudor dollies figures (available from steel fist miniatures) with the lower legs of a marching figure from the above mentioned Perry range and Tudor head.

These figures are accompanied by some soldiers in armour from the Perry Miniatures mercenaries set with minor conversions such as adding cloth caps, feathers and slashings at the knee. Here's two of them alongside a front view of 2 figures in coats one of which has a simple French field sign on the chest. 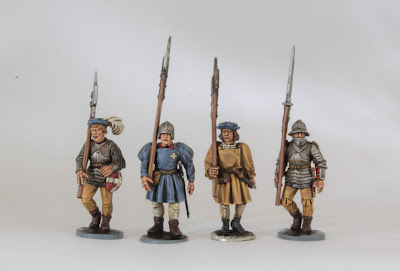 I added slashings at the knee and a bevor to the figure on the far right. If you want to try your hand at sculpting these were fairly easy additions to do.

I wanted the armour to look a bit worn so I added a brown wash after the mid tone and highlighted the edges.

Here's the front view of the other figures in coats alongside a chap in a brigandine and puffed/slashed sleeves. 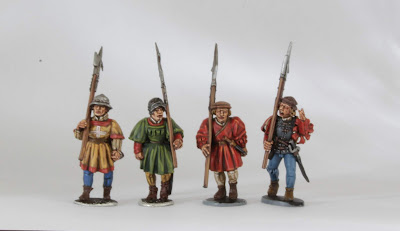 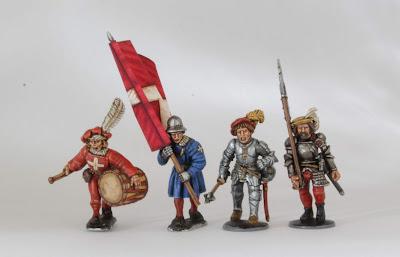 For the command group the two figures on the left are from Steel Fist Miniatures, each with converted Perry heads - the first one is a Swiss metal head which I added a wide brimmed cloth cap to and the second was made by adding a kettle helmet to one of the unarmoured heads in the mercenaries box.

The banner is from Pete's Flags available direct from Pete via his blog.

The unit commander is from the Perry mercenaries box, I also gave him a cloth cap and painted his armour with a bit more status and shine than his counterparts. The final figure has Swiss pike arms from Steel Fist Miniatures and converted chest and thigh armour. Of all the conversions I'm not 100% happy with this one as he has an odd gait but 11 out of 12 aint bad !

I took this opportunity and a rare day off to review my French infantry, first up here's a shot showing the evolution of both my sculpting and painting over the past few years. As my sculpting ability in particular got better I was more able to create figures much closer to the source material which previously seemed out of reach. 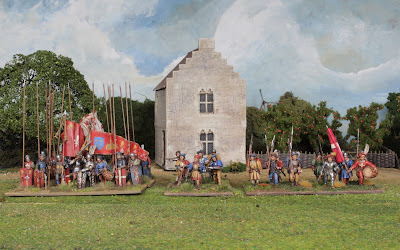 The Picard pike on the left were the first figures I completed back in 2014 for the French army, for the most part they're a painting conversion of figures from the late 15c with some of the Perry Tudor heads and are intermingled with a few 16c figures, they look great as militia and can hold their own alongside the other later figures. If you're not keen on sculpting this would be the way to represent the French home raised infantry. Alternatively I think using some less flamboyant Swiss or Italian figures may work equally well.

In the centre are some mixed missile foot completed during 2015, a mix of figures in coats and doublets. On the right the latest additions in coats and armour. It really feels like things are coming together.

I hope you like them, I like the irregular look of the latest additions in their own coats and the difference that can be achieved from the Tudors using similar figures. To complete the French infantry I'll add some longbowmen in livery coats at some point. My army also desperately needs some commanders so there's lots of potential avenues for my current French focus to follow.

If you're interested you can get the art of war book via amazon but it's not that large and the paintings are a bit blurred. For the images search 'Berault Stuart d'Aubigny traite sur l'Art de la guerre'.

On a final note these were all painted using a magnification visor which has made a massive difference for me, they're much neater and were actually a bit quicker to paint than without it.