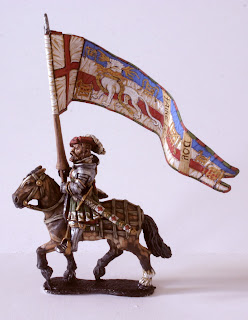 Further to the previous post, progress is steadily building for the command unit that I am working upon so I thought i'd give a second WIP to give each figure some individual focus and credit.

Like the previous figure this gentleman is also painted as a Yeoman of the guard wearing his field dress riding jacket, this is the second known variation of said jacket, the difference being that it is guarded in green and white rather than gold and has upon breast and back an embroidered crowned Tudor rose.

I have added further decoration to the sword scabbard with alternate St George crosses and crowns on a green and white livery base. 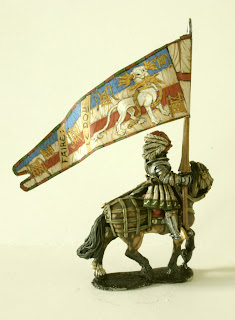 I did some light conversion work by replacing the original gendarme head with that of a Landsknecht for a consistent yeoman image (though they were issued with sallets). For strength I pinned this to the body then sculpted a collar with green stuff to smooth the join.

On to the standard and a hint at the next blog post; this faithful yeoman carries the standard of Charles Somerset, Lord Herbert & Lord Chamberlain, commander of the rearward for the 1513 invasion.

I'll expand upon him in the next post but this standard represents the digging, reading and re-reading aspect of this army which I find both challenging and rewarding.

The Challenge was just pinning Somerset down as a commander, he has the above 3 titles and in 1514 (or 1513 depending which source you read) he was also created Earl of Worcester, I'm no peerage or Tudor expert but it took quite a while to discover that this was one man rather than four, as almost all of the original sources quote various titles, even Cruickshank's 'Army Royal' does the same thing. It was only in finding his standard that I managed to figure it out. 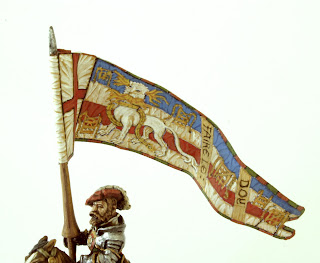 The reward in this instance was finding that there are 5 known standards and banners for Somerset; 2 standards from his coat of arms, (this one and another depicting a Wyvern) 2 standards specifically for his Lord Chamberlain title and his square heraldic banner which itself also has two variations.

I settled upon this banner as it is his personal standard and a most colourful and unusual one at that.

Upon a field of blue, white, red, white is charged 'a whyte panther incensed, gorged with golden crown and chain. Sprynkled with three golden portcullises of Beaufort and as many bascules (moat locks) the former charged with a bendlet sinister'.

Next up, the man himself.