Here is the final piece in the latest series of works in progress, a figure representing Charles Somerset, Earl of Worcester, commander of the Rearward during the 1513 invasion of France.

As with the previous elements, here are some individual photographs of Somerset; 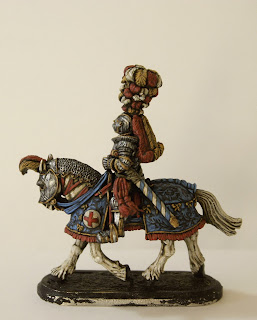 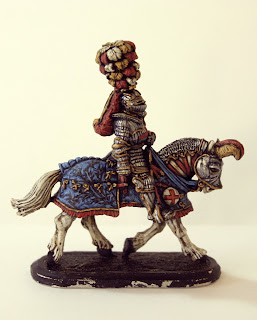 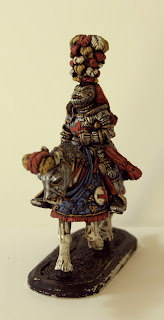 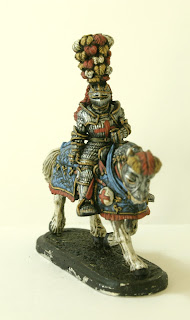 The figure is / was a Wargames Foundry limited edition single piece sculpt which was available in rather small numbers shortly after the launch of their Renaissance range quite a few years ago. I haven't seen one since either on their site or via eBay but I'm assuming they have the mould and they have lately been welcoming suggestions for previously unavailable figures to be re-released so it could be worth a try if you're interested.

I've added some sash and tassel embellishment to his sword from a Perry ACW command sprue to give him a little more gravitas and add to the sense of movement in the sculpt. Further to that I have painted him very much as a King's spear, you can read more about these here.

The horse barding is a rich blue damask, which along with the sword hilt it is a nod to his coat of arms.

Painting decoration like this does require a lot of patience and a steady hand and most importantly some sort of stencil or reference point, preferably in black and white. I first tackled this when I did a unit of the aforementioned King's spears and noted a few hints and tips which you can find here.

This figure was very kindly donated to me by another enthusiast and friend, Simon Chick, if you're not aware of his works you can view them at his blogs dedicated to medieval warfare spanning the late fourteenth century up to the late fifteenth century;

You can merrily lose an afternoon leafing through his projects past and present and if you're not inspired I'd check your pulse, his were one of a few blogs which led to me creating this one so thanks again Simon!

So all in all, this unit via conversion or limited availability is entirely unique and here's the finished piece; 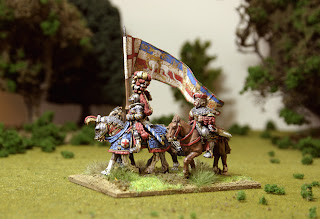 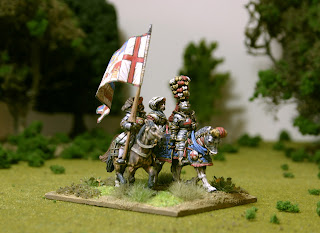 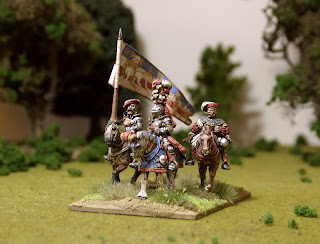 As mentioned, Somerset commanded the rearward, a force totalling 7500 men within which his own retinue accounted for 1063 of that number. His most notable exploit during the campaign was a diversionary action with the garrison of Therouanne who 'skirmished with his people very valiantly' whilst the Battle of the Spurs was reaching its climax.

He was the second Captain of the Yeomen of the guard from 1486-1509 during Henry VII's reign, so his faithful companions here could well have been ex servants under his command.

This post ceased in 1509 by virtue of Henry VIII creating him Lord Chamberlain of the Household the day after his father's death (essentially the King's spokesman at court).

There is a suggestion that he may also have seen service at the battle of Blackheath in 1497 as he was made knight banneret on that date.

I now have all three of the main commanders for my army, here they are in steady array in the French countryside; 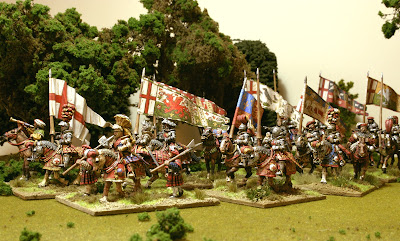