I have taken the time to collate some research to put together these two sheets of flags for Henry VIII's 1513 invasion of France. There's not much out there commercially as far as I can see so hopefully these should help any current or potential collectors of Tudor armies out there.

Sheet one has a few livery flags and banners which I could find of a couple of captains who are mentioned in the books I have. Sheet two has all of the main commanders.

As you can see they are black and white, ready to be printed and painted. I print them onto self adhesive paper and then paint, cut out and stick to the spear / lance which is to hold them. It's very simple and it works with the minimum of mess.


For colour references look at previous posts for the swallow tailed standards with the exception of George Talbot, 4th Earl of Shrewsbury, which looks like this;

I'm not sure what the motto was, there's a chance that it might be the same as his father John, so I'd welcome suggestions from any WOTR gamers out there.

The livery banners are all green on the right side with yellow fleur de lys / portcullis and a Tudor rose, here's an example; 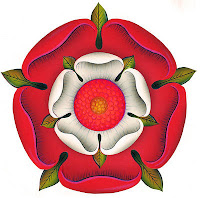 The St George variants are red and white as you may expect with Tudor roses as above.

The Holy trinity is a bit of a guess. It was the same banner which was carried by Henry V's army at Agincourt which is shown as a white / gold shield with black script on a red background. The versions I have been able to track down show the shield in slightly different formats which are either as shown here or with the shield upside down (hope that makes sense!).

Somerset's flag is the royal arms bordered in blue and white with a yellow band, and the two captains of the middle ward, George Neville & Edward Stafford (both recorded as contributing large personal retinues for the campaign) are as shown here;

I have also included the Burgundian cross of Maximilian for the 4000 landsknechts which were hired for this campaign, again, colour notes are shown on a previous post.


There will be a third flag sheet at some point for the cavalry commanders, i'll put these up when I get round to sourcing some cavalry for the army.