I've been meaning to do these for a while now and as ever all I needed was a bit of inspiration. In this case that came in the form of having a lot of Perry Mercenaries sprues with handgun and crossbow arms going spare after building the recent Scots pike.
This combined with some standing artillery crew from Steelfist Miniatures that I had and the pliers and hacksaw were out.
I removed the arms from the figures and in 2 cases re-positioned the legs then used the remaining lump as a dolly.
I took measurements from the Perry plastics and modelled these as closely as I could so that they could comfortably take the arms.
Here they are in their intended use, French missile foot on the home front or as mercenaries in Scots service. The arms i've chosen show that they can be assembled without further sculpting of sleeves - though you can of course do that and no doubt I shall be. 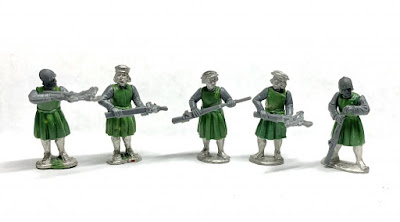 They also work quite well as longbowmen, again with the right arm combinations they work well without further sleeve sculpting to represent men not in livery or with a bit more work you could have them in base coats as I have done with my existing tudor infantry. 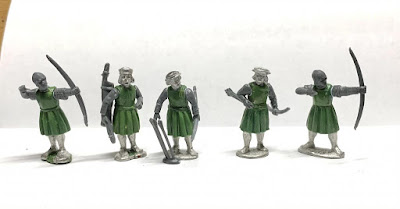 I'm working on another 3 to add some further variation, these will have slashed chests and possibly slashed hose showing at the knee so that they could be used as Flemish, French or Landsknecht or better off English.
The next challenge will be making some arms so they can be used as standing bill/pike but one step at at a time.
I'll post up the remaining 3 when I do them and keep you updated re the casting and availability - it'll be a few months as i'll have to take my place in the queue.
Stuart
Posted by Stuart at 09:20