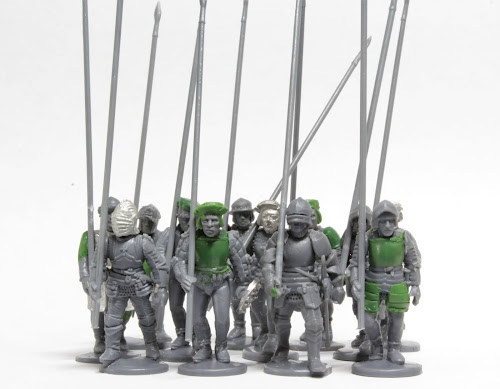 Well it was only a matter of time wasn't it.

I have taken great inspiration from the border themed wargames myself and Oli have had this year and finally took the plunge.

These games led me to dig out what resources I have on the Scots to get an idea of what their appearance would be for the period 1495-1525. This covers the latter half of James the IV's reign through to Albany's protectorate.

The main sources were;

I found the top five to be of particular use for descriptions, illustrations and photographs.

I welcome any further recommendations.

The increased time at home gave me a rare chance to get reading and suitably inspired me further to get kitbashing with some reasonable confidence of what I was trying to achieve.

My plan is to create a 36 man block of pike comprising four 60x60mm bases each of 9 figures and without banners. This will create the look of a tightly packed block of pikemen and should be suitably impressive when the square is done.
I will then create further bases of command groups with the relevant banners and liveries.

This way I'll have a flexible body of figures that can suitably accompany any retinue. It'll be the building block to work from.

The figures represent an arc of men from the Lowlands starting at those poorly equipped via professional soldiers through to lesser gentry. Most are composite from a few sets with a bit of sculpting.

The real time consuming sculpting to represent men in retinues (i.e. base coats and more up to date kit) will be left to when I come to the command groups and already have this block of men done.

With the above in mind the figures are split between armoured and lightly armoured as well as varying quality of equipment and clothing; 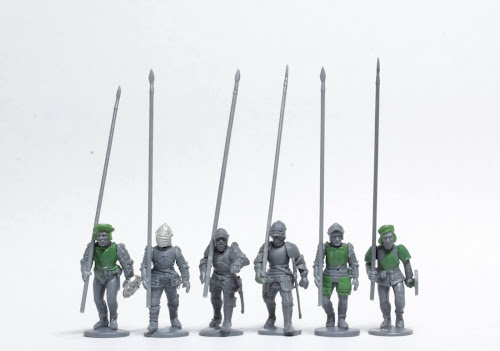 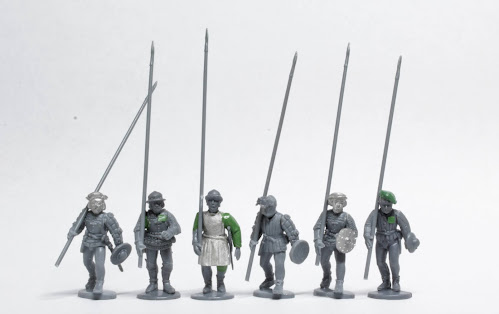 The figures are primarily made from the Perry Mercenaries and Foot knight sets along with bits from the Mahdist Ansar set (2 of the heads). The figure in the coat was converted from a Steel Fist Tudor coat dolly and there's also a Landsknecht helmet with bellows visor from Steel Fist. The small lead shields are from Dixon Miniatures.

There's still more combinations and sculpting that I hope to achieve but I thought I would share the exciting new direction the collection is going by way of this latest progress.

Here's the links if you'd like to read more on those recent games as well as some from the last few years with a Scots theme;

I presently have a few projects nearing completion which i'll hopefully get the chance to share in the coming weeks.

Please do get in touch with any recommendations for books, websites and indeed any resources that you think could be worthwhile for this new avenue.