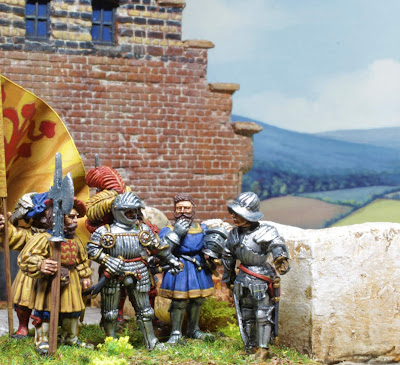 In comparison to my Tudor army I've found it rather difficult to find many details of the French commanders so I've naturally shied away from them. Doing so for almost 10 years is not really an excuse though so here's a much delayed addition to the collection.

Antoine de Crequy was the commander of Therouanne when it was besieged in 1513. The noble family was established in Picardy along with other notables also involved in the campaign, principally Bournonville, Sercus & Heilly (to whom I've found equally scant information)

Antoine had the nickname ‘le Hardi’ (the bold) and died in 1523 at the siege of Hesdin apparently killed by friendly fire. He also commanded artillery at Ravenna and served at the Battle of Marignano and siege of Parma in 1523. He was known as one of the most illustrious captains of his day. 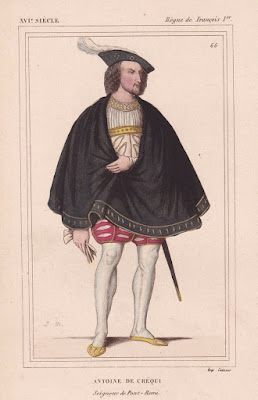 ‘Nul s’y Frotte’ (none will touch them), is the motto of the Crequy family. The family had a castle at Fressin in the Pas de Calais which interestingly for this blog was almost destroyed by the English in 1522. 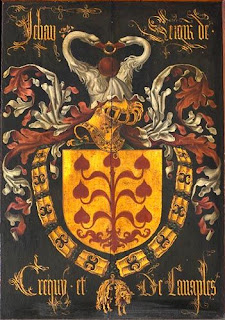 The Crequy coat of arms is a red wild cherry tree on a golden field. Jean de Crequy was one of the first knights in the order of the Golden Fleece.

If you have any further information on Antoine or indeed any of the French commanders during this period please get in touch.

On to the figures.

I've had this base in mind for a long time and wanted it to be a nod to Antoine being commander of Therouanne. I wanted to have him surveying the defences or speaking to his commanders so a slightly more informal setting was required.

I took a lot of inspiration from this scene from a tapestry depicting the events of the 1513 siege of Dijon. Here the commander of the town Louis de Tremoille speaks with the Swiss besiegers. Louis in the centre Note is flanked by other nobles and 2 guards wearing coats in his livery and bearing large badges of his wheel motif. 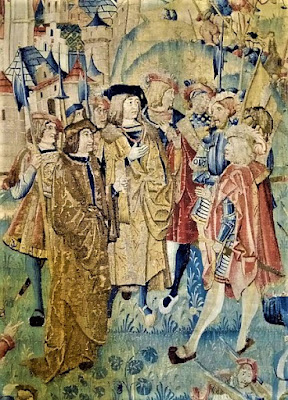 So I mixed the two ideas together to create a base of him speaking to one of the captains defending the town. He's flanked by a Landsknecht and 2 guards in his livery with one carrying his personal banner. To his left is another noble considering the news the captain is relaying. 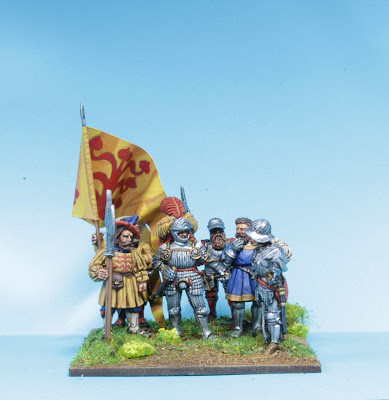 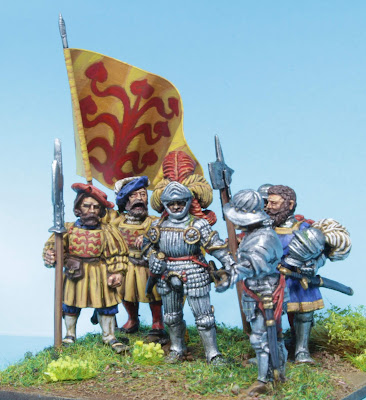 For Antoine and the other noble I used two figures from Steel Fist, these are from a great set of 16c dismounted knights and really give a period feel to the base.

The captain wears older armour, this was a metal figure from the Perry Miniatures WOTR range with a headswap from the European Mercenaries plastic box. 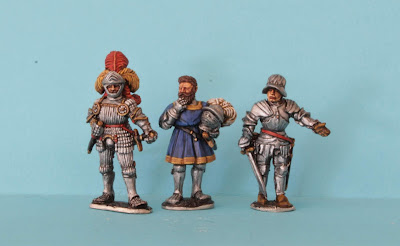 For the guards in livery I sculpted skirts on to 2 Landsknechts from Wargames Foundry, I also added some hair to the figure with the halberd. I'm really pleased with how they look, i'll certainly do this conversion again as it's a great way to re-purpose the figures.

Note the small raisers on the bases, these are 28mm figures but they're somewhat shorter than the SF knights so I evened things out a bit so that the disparity isn't too great. 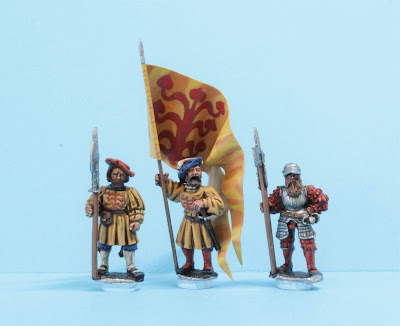 I'm very pleased to be back painting again, an almost 4 month hiatus has not been welcome !

Have a great Christmas all.