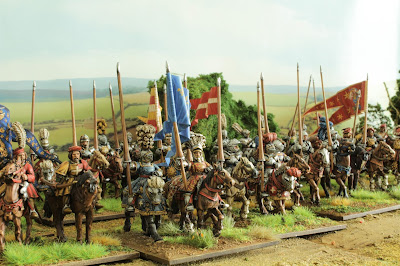 Quite a treat for you all today and very much so for me, I'm pleased to say that I have completed 2 lances of French Cavalry for my Louis XII army.

Edit, and with a day of decent light (and the family out shopping ) I've now taken some more photographs and added more information.

This has been quite a while in the making as I had a few figures languishing on the painting desk looking forlorn but they're now done.

I began this project with one lance of cavalry in my collection which comprised 2 bases of Gendarmes, 2 bases of Men at Arms and 2 bases of Ordonnance Archers, the brief was simply to double this.

I began with the men at arms for which you can read more about here.

This left the Gendarmes and Archers to do which I worked upon in tandem. The archers required sculpting and converting and whilst this was ongoing I'd slowly be working upon the Gendarmes. It worked rather well as the sculpting was often a welcome break from the painting and vice versa. 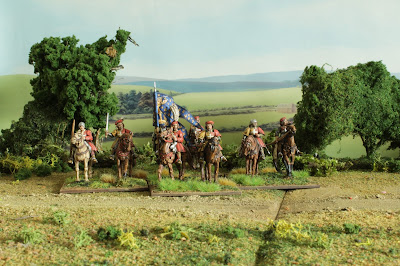 For the Archer cavalry I decided that these would be mounted on metal horses to fall in with the rest of the cavalry figures for scale and overall appearance. I had toyed with using the Perry Plastic horses but they were on the large side in comparison to the old 25mm Wargames Foundry Gendarmes so this was the compromise. I used riders from the Perry Light Cavalry boxed set as dollies and then raided my collection for their horses which were almost exclusively those from the Perry WOTR ranges.

The bodies were filed at the waist and upper leg, attached to the horse and sculpted in stages of usually left coat and front, right coat and back then the sleeves in one, here are some photographs of this finished process and the painting thereafter; 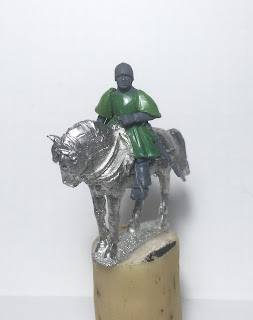 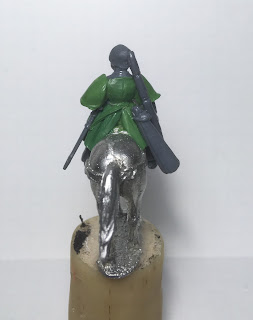 For the belt I pressed a groove into the coat and then added the belt afterward so it didn't look like it was sitting too flush on the coat. Also for the same reason the arrow bag and cased bow was pressed into the coat during drying. 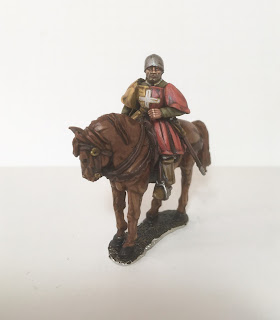 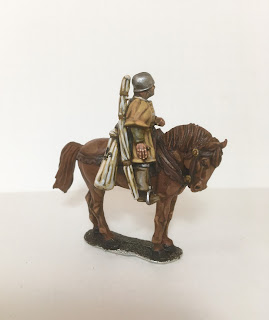 I painted the archers in red and yellow livery which for my collection can represent Louis XII, The town of Therouanne or the livery of Antoine de Crequy a powerful Picard noble. Note also the fleur de lys on the arrow bags which I thought was a nice touch.

For the standard bearer I wanted a bit more flair so I added a pair of gauntlets hanging from the saddle and some fine plumes. 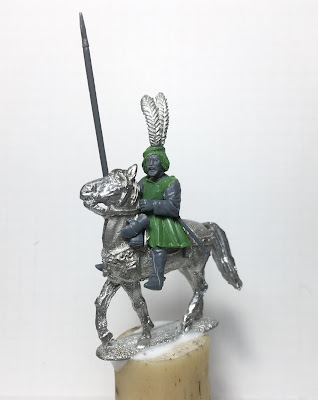 Here's another archer for whom I have returned to my now tried and tested method of cutting down a head from the Perry Ansar box then adding a sculpted cap and hair, they're such expressive faces. 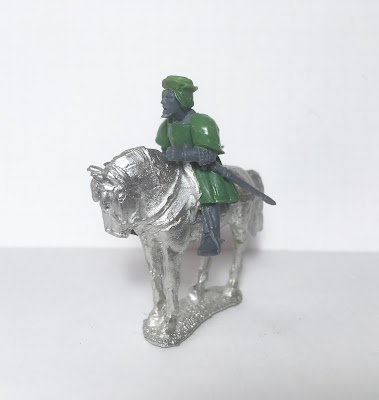 I was keen to have a bit of variety in the unit so here's a straight up build with an Ansar head and cap; 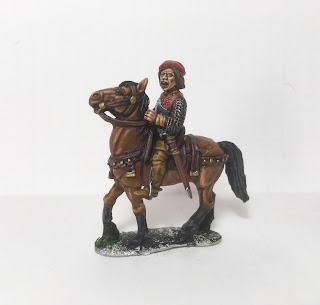 Here's the completed unit of archers. All but the base on the far left are new, in fact I was going to convert these as well but I was fond of them as they were the first figures that I converted and painted for the French army so they had a stay of execution.

The banner is from Pete's Flags. 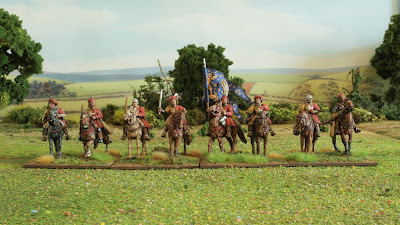 I'm really pleased with the way these have turned out, I've wanted to create this unit for a very long time and have had fun using them in recent games.

On to the Gendarmes, here are the two new bases; 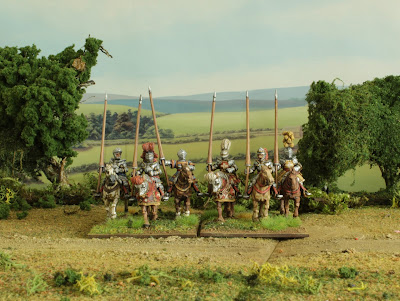 It may sound odd but these were a nice break for me and whilst they were very intricate I really had a lot of fun painting them. I won't lie, they took ages but it was very much a labour of love, lets have a look at each base in some more detail. 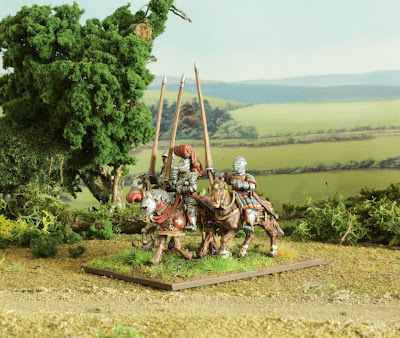 For this base there were two points of reference that influenced the figures, the first for the figure on the right was a Gendarme that caught my eye in the David et Bethsabee tapestry. I liked the simple fringed design of his coat as well as the colours. The addition of a cross of St Denis on the chest really set the figure off. 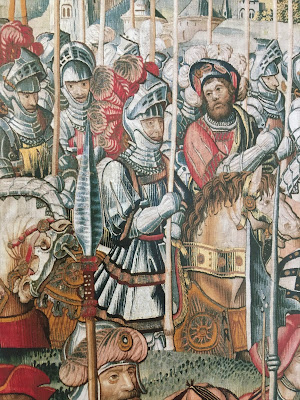 For the Gendarme in barding as with my existing Gendarmes I really wanted to spend some time on the painting and do my best to create a really stunning piece. 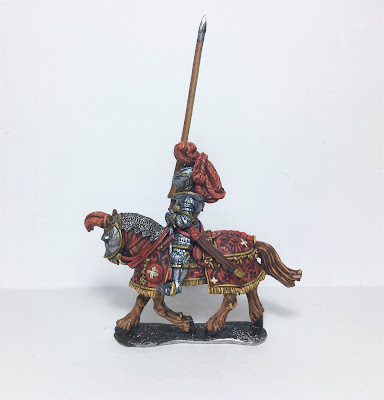 I was keen for the armour to look brilliantly polished so I painted it as follows; 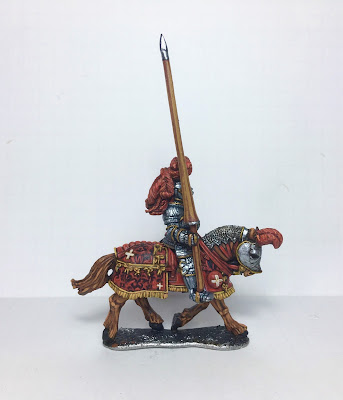 The influence for the barding is from a painting of the Battle of The Spurs, note the positioning of the crosses of St Denis and the bordering of each part of the barding on the French Gendarmes, this positioning and general theme features in most of my Gendarme figures it's almost a formula I suppose.

On to the second base and for this I wanted to experiment with a couple more points of reference. 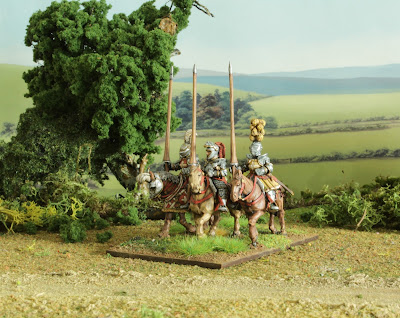 In the first instance 2 of the Gendarmes are in fairly simple coats of 2 to 3 colours though red yellow and white is a bit of a theme on Louis XII's livery. The addition of a cross of St. Denis on the chest focuses the figure and along with the armour it just really adds something to the overall look and indeed they're undoubtedly French. You can see this on a variety of contemporary sources. The Figure in Yellow on the left has had a plume from the Steel Fist Renaissance Gendarmes added to his helmet for a bit of extra variety.

As with the previous base I wanted to create something that would test my abilities for the Gendarme with horse barding; 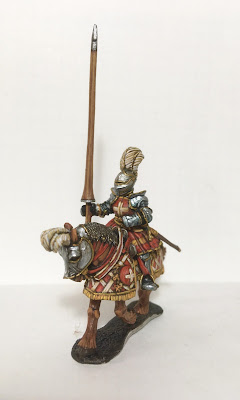 I applied the same principle of the aforementioned bordering of the horse armour alongside a weave pattern which features fairly regularly in depictions of heavy cavalry of the era. The image in particular that inspired this figure is a woodcut depicting the opposing forces at the Battle of Ravenna 1512 which also serves as a demonstration of the St Denis field sign; 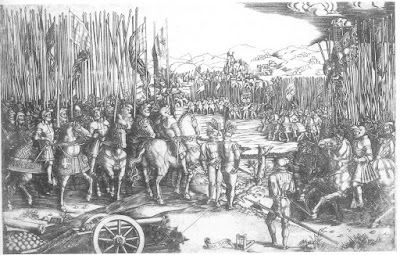 Note the weave pattern on the Gendarme on the left.

It was a bit tricky to get right but the key was simplicity; I used a size 2 brush for the pattern, it's width was that of the weave so there was uniformity. Once the cross hatch pattern was painted it was highlighted and 'weaved', I found myself saying 'over and under' a lot whilst I was doing it. 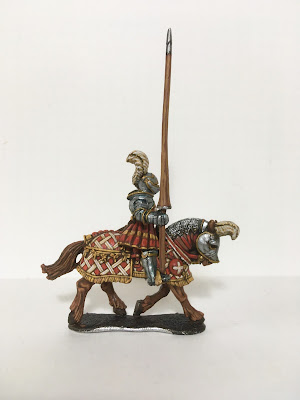 These two bases of Gendarmes now perfectly complement those already in my collection. Note that I opted to not have any banners in the new bases, I think it makes for a more convincing unit of heavy cavalry as after all the lance was the whole point (pun intended !). They certainly have an air of lethality and arrogance about them. 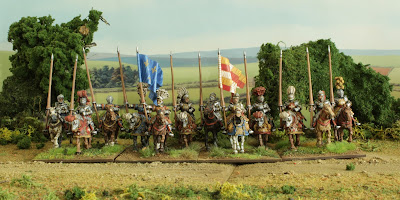 The Gendarmerie is now looking to be a force to be reckoned with and hopefully an artistic and historically sensitive depiction of their troop type and roles on the battlefield. It's a period of change in the development of the French cavalry arm but I really think the mix of the Gendarmes in their finery, bow armed ordonnance archers and men at arms in their mix of arms and armour really pins the unit to the campaigns of 1510-1520.

Here the Gendarmes are lined en haye (in a single line) all jostling for position with the Men at arms forming the second rank, off in the distance are the archers in support. 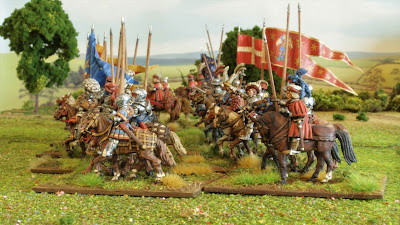 Here's another take on the battle line with support from some of my collection. 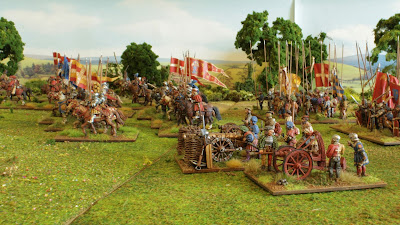 Finally, here's a nod to the tapestries that continue to inspire me; 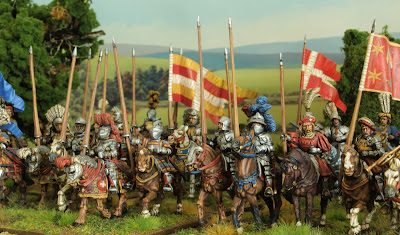 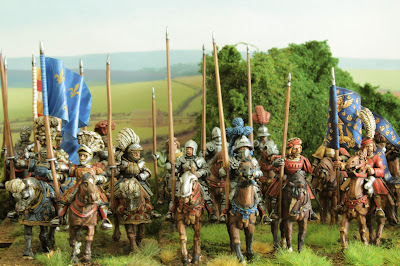 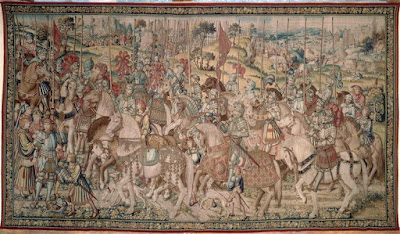 There's still much more to come for my French army but I feel a return to the Tudors is likely to be the next project.