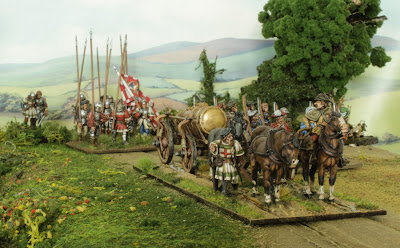 Here's the first of what I hope will be an extensive baggage and Artillery Train for the Tudor Army, a Great Bombard on its cart for transport.

This represents one of the heaviest guns in Henry VIII's 1513 expedition to France, the Great Bombard, this and 5 others were used in the siege of Therouanne to batter away at the extensive town walls. In this instance (as opposed to the siege of Tournai in the same campaign) the walls of Therouanne were well defended with culverins manned by skillfull artillerymen which forced the Tudor siege lines to be placed further back, out of range of the defenders lighter pieces. As such the siegework was heavy going and though damage was caused, the slower and more limited rate of fire of these heavy guns coupled with the resistance of the garrison made for a protracted siege.

The Heavy bombards fired a projectile weighing 260lb and required 80lb of gunpowder to fire but they could not fire more than 5 times a day. It's not stated how this was determined but certainly the temperature of the barrel and preservation of the gun coupled with the time taken to prepare each firing were no doubt contributing factors.

Each of the 6 guns were pulled by a team of 24 Flanders mares - I wasn't quite tempted to fully duplicate that though I did toy with separate bases of 4 horse teams as they could be interchangeable, perhaps later. 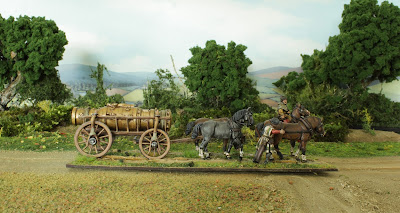 I've been working away at this piece for quite a while now, the idea was first planted back in October 2015 when Simon Chick and I put on a Lion Rampant demo game which involved the rescue of a gun from a river crossing. For that game Simon had used a bombard on a converted Perry Miniatures cart and as often with Simon's work I was inspired.

The idea lingered on for a while and over the last few months I've been working to bring it into my collection. The starting point was getting hold of a suitably large bombard for which a 1/72 Zvezda kit served very well for the bombard and a variety of other useful bits; 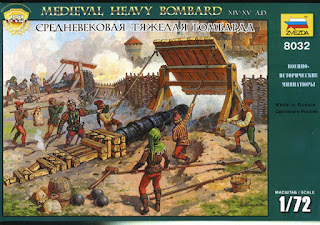 Being a medieval kit the bombard was the classic hooped barrel design which I wanted to somehow remove and update into the sixteenth century as per these examples from Maximilian's armoury; 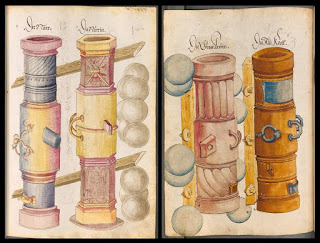 Furthermore the gun had to have a suitably Tudor appearance for which some of the grand culverins in the Mary Rose had long been a source of inspiration; 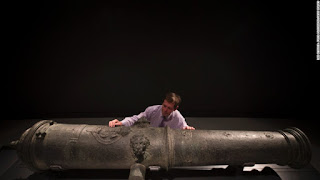 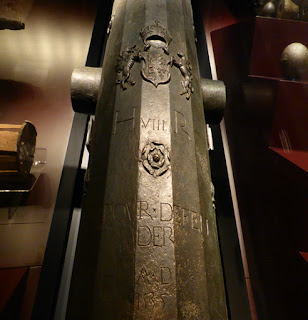 In effect I was hoping to achieve a combination of the ornamentation and grandeur from both sources as well as some sort of iconography. Henry had 12 'apostles' each apparently named and decorated with their namesakes so there was lots to try and incorporate, here's the result; 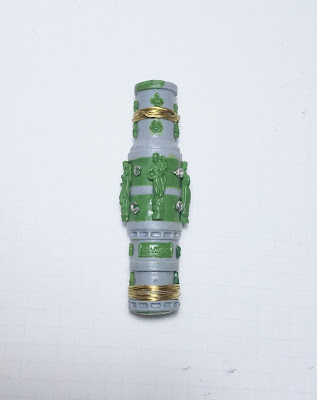 To begin I filed down the hooped furrows along the barrel using a Stanley blade and needle files and I then set to work sculpting Tudor roses and Fleur de Lys' along the length of the barrel. After the first of each this task grew rather difficult so I used Siligum to create a press mould of each design and then simply moulded and glued the remaining features.

As for the Iconography that proved to be a real sticking point, suffice to say I now have a lot of Catholic jewellery and keyring suppliers in my search history ! Over a pint with Simon I lamented my difficulty and in solution he found a railway gauge shrine of the Virgin Mary and child (suitably iconographic for Henry's early reign) and made a mould for me, 3 pressings later and the gun was really taking shape, this was a real breakthrough in the project.

To finish I added a panel with 'H VIII R' carved into it and then used picture wire to model rope lashings around each end so it looked like it was secured onto the cart.

The gun was then painted gold and washed with a mix of sepia and brown inks along with a touch of dark orange and dark brown paint before being re-touched with the base colours. 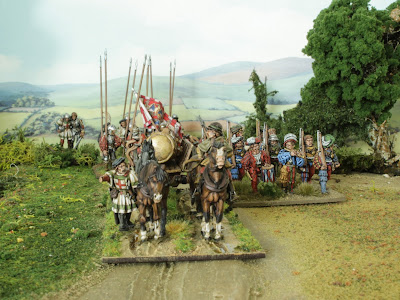 Once complete I mounted the gun on a Perry Miniatures WOTR open sided cart, the sides of which I had to bend / angle to accommodate the width of the gun. I initially wanted to secure the piece but thought better of it so that I could have interchangeable loads for the cart. For the final touch on the base I added one of the Tudor dollies modelled as a longbowman giving the carter directions.

For the base I secured the horses and longbowman into place then modelled a muddy roadway with coloured filler - I mix the base brown with white filler for my bases so that if it chips it doesn't show up white. This was then painted and flocked with some tufts and puddles (yacht varnish) in some of the deeper indentations before the cart was added at the end.

So it's been a long time coming but hopefully worth it, I've definitely got a few gaming scenarios in mind already, and as the title suggests there's more coming soon with this piece.