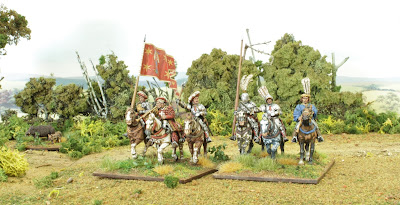 Whilst packing away the figures after the Lion Rampant game (see previous post) I dropped a box containing all of the heavy cavalry, a rather painful episode and another rite of passage in my wargaming life I'm told.

Since then after a week or so of not being able to look at them my efforts have been engaged in repair. Two of the existing four men at arms were beyond repair and this acted as a useful prompt to re-evaluate this unit. I managed to save a couple of the horses and set about creating some new riders and a couple of complete new figures. Once I got started I soon found that I had six figures which I based 3 to a stand to match their accompanying heavier Gendarmes (who also all lost their lances!).

This immediately looked right as whilst 'archer' cavalry were allocated some specific duties their principal role was to support the Gendarmes and as such would be intermingled as one unit and/or would form a second charge line. 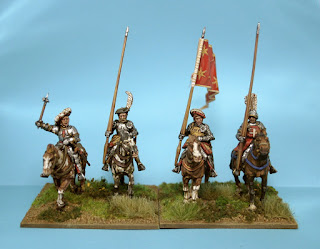 Here's the unit prior to damage 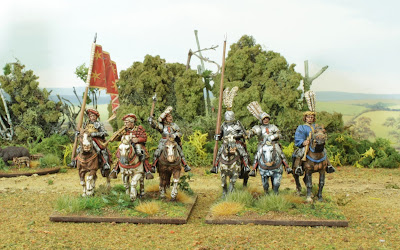 The completed unit re-modelled and re-based

Both trumpeters are new additions, I'd had these sculpted and on the back burner for a while and this seemed to be the perfect unit for them.

The trumpeter in red and yellow livery was made 6 months ago. The body is from the Perry light cavalry set and the head is from the Ansar sprue. In painting I added a pair of gauntlets hanging from the saddle. 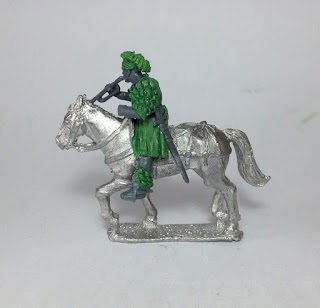 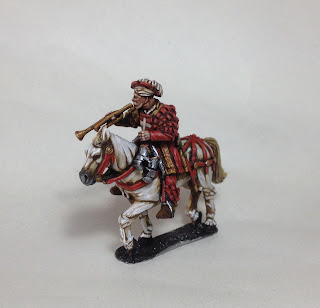 The next trumpeter was completed a couple of months back, I had initially intended it to be part of a unit of German crossbowmen but following a bit of re-modelling he's now a Frenchman.

The initial sculpting is below. I wasn't too keen on the arms so I removed the green stuff and recreated them as heavy voluminous sleeves rather than slashed. 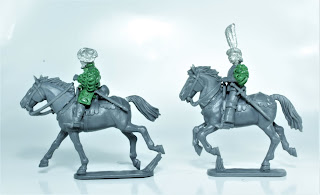 Here's the completed unit with accompanying Gendarmes, I intend to do another two bases in the same manner - no doubt with a few less command figures and I think I'll model some in skirts. 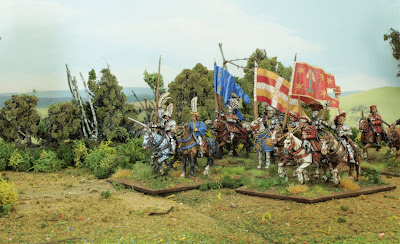 All in all a better unit I think though I hope not to repeat the same method in creating figures !