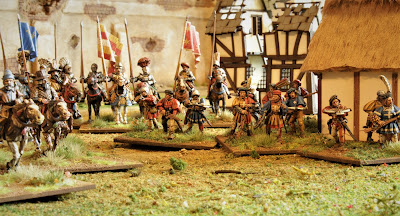 Having played Lion Rampant a few times I liked the ease and flexibility of the game and thought it could be a good platform build upon to extend it into the early 1500's. In fact my very first experience of the game was along with Simon Chick in putting on a demo game with a Tudor scenario which I very much enjoyed. This time I have used the standard troop listings as a basis to create some bespoke Tudor and French rosters as well as introducing a few special rules to embody the unique character of their respective armies.

Armed with these rudimentary scribblings I hosted a couple of games with gaming buddies Jeff and Keith, here's how things unfolded in the first game which used 'the fugitive' scenario as a basis. My kitchen was the setting for the violence on the table, being winter the light wasn't too great but I made the best of it with longer exposures on the camera. 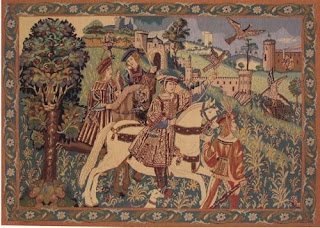 Keen on a bit of impromptu hunting a Landsknecht paymaster finds himself a little too close to the enemy lines, wary of a mutiny and keen to avoid the French having the opportunity to offer him more money Henry orders a hastily assembled Tudor relief force to rescue him. The French must prevent the escape.

1 unit of Men at Arms

All figures are from my collection and are based in groups / units rather than individually, whilst not quite how LR is intended the number of figures on the table is the same.

The boards and city walls were expertly made by David Marshall of TM Terrain and the buildings in the centre are from 4ground. 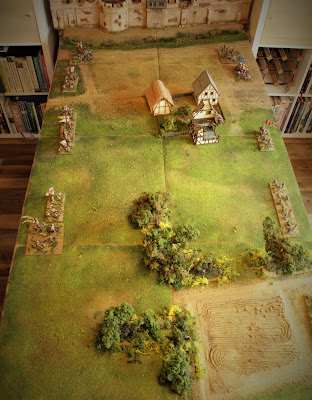 Here's the initial set up (I'm very tall and on a step ladder !) with Tudors on the left and French on the right. There are six possible hiding places for the fugitive; each of the three buildings, either of the two hedgerows or the earthwork ditch in front of the city walls. Upon reaching a hiding place a D6 is rolled uncovering the fugitive on a 6 at the first hiding place, 5 or 6 at the second and so on.

The French began the action with a general advance with the exception of the Landsknecht arquebusiers who failed their activation role. The men at arms just reaching the edges of the abandoned village whilst the crossbowmen covered their left flank advancing through ploughed fields. 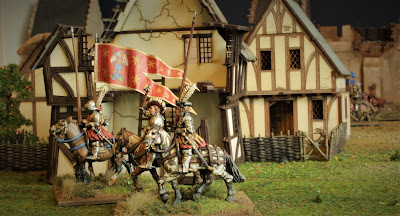 The Border Horse on the Tudor right flank spurred into action and reconnoitred the hedgerow to their front and though they startle a hare the hounds do not pick up the scent. Meanwhile the Demilancers advanced toward the abandoned village falling just short of it with infantry in support following a little behind. Over on the left flank the Border Horse reach the ditch and fail to locate the Landsknecht hunter, gingerly aware of their opposing Stradiots and Gendarmes. 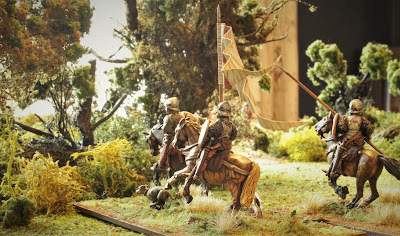 With a little encouragement the Landsknechts make their move toward the hedgerow while this time the crossbowmen were distracted by the opportunity for foraging in the field. The French men at arms in the centre moved cautiously around the edge of the village whilst the Gendarmes and Stradiots moved ominously forward. 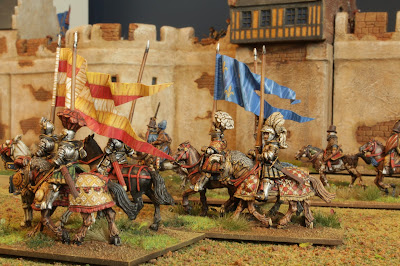 With the garrison billmen moving up to cover his flank the Earl of Essex dismounts, sword in hand and kicks open the door of the house in front but no paymaster in sight. Over on the right flank the dogs are put to work scouring the second hedgerow, their excited barks and some impromptu teutonic cursing herald their quarry and trumpets are blown. This excitement draws the attention of the adventuriers to their front who send off a quarrel of bolts but somewhat unhelpfully the cover of the thickset hiding place absorbs the damage. 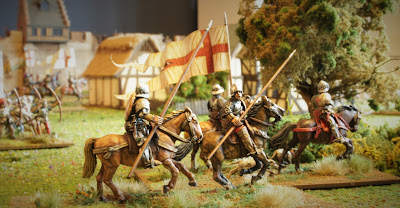 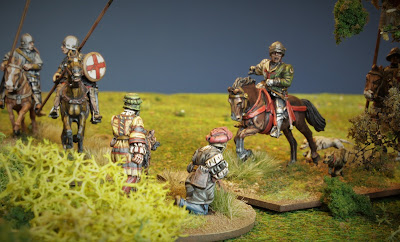 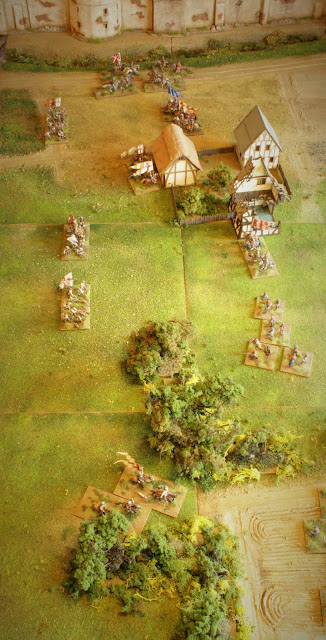 The men at arms realise the cacophony must be ominous and advance to try and block the retreat crashing into the garrison bill holding the edge of the village. 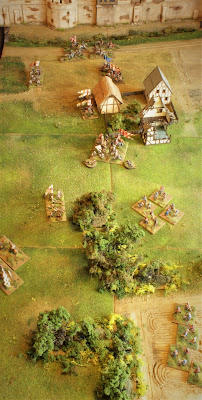 Unfortunately the bill were prepared and after clash of arms and casualties either side they hold their ground forcing the men at arms to retire. 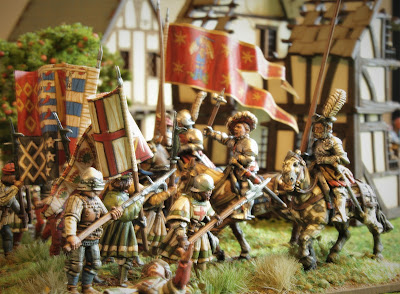 Meanwhile the Stradiots skirmish with their Border Horse counterparts and with bad dice come off worse, falling back battered. 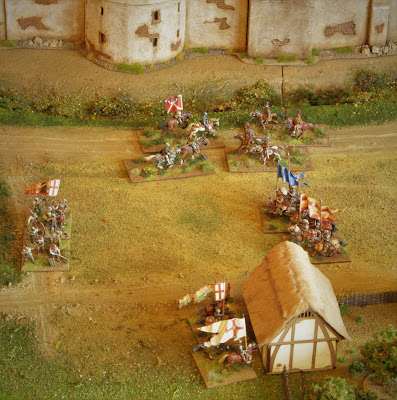 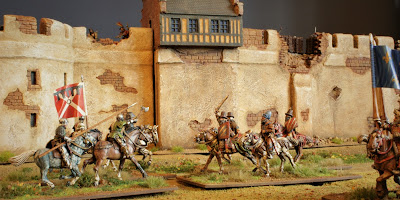 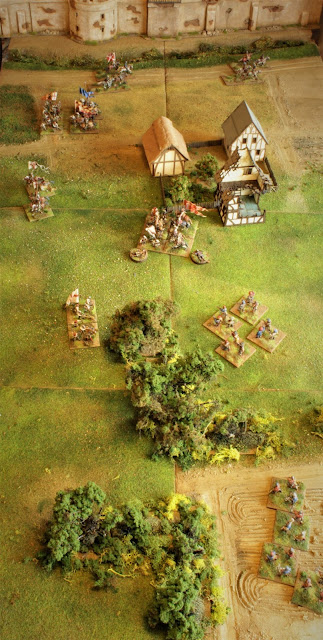 Essex hears the trumpets and feels the ground trembling as the Gendarmes close in on his left flank sensing that perhaps it's time for discretion he bids good cheer to the men of the Calais garrison and retires toward the longbowmen to his rear. To hold their front the Longbowmen loose their arrows ineffectually into the advancing Gendarmes.

The Landsknechts immediately test the cheer of the garrison men and pepper them with a volley whilst with the centre held the Border Horse quickly take their objective back toward the safety of the English camp with Essex hot on their heels to take the credit.

It's now looking a bit lonely for the remaining Tudor infantry as they edge back but the French blood is up and they throw their Gendarmes into the Longbowmen who infuriatingly manage to hold the line. 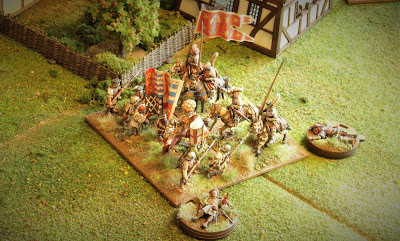 Back in the centre the game draws to a close as the garrison bill save some extra time for Essex' escape by stubbornly resisting the men at arms to their front. 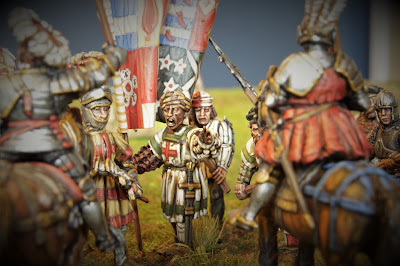 All in all a good game, Keith with his French hat on had bad luck at some crucial points, particularly in attempting to get the left flank of Landsknechts and Adventuriers to move much to the delight of Jeff in his cloth cap who made good his escape.

I felt the initial adjustments to the rosters helped add a period feel, for example the Gendarmes had a fairly high move value but has the wild charge special rule so whilst they wouldn't always do what you wanted they were ominous and somewhat unpredictable. The Stradiots and Border Horse were evenly matched each with skirmish and evade functions and the Landsknecht shot had a shorter range but packed a punch effecting a -1 armour on their targets.

We played a second game with a culverin on the French side and Organ gun on the English which had quite a few in game tweaks to get it right which distracted me somewhat and I took no photographs. Another game is in order to put that right.

There's still some tweaks to make which I hope to play test further but once I'm satisfied I'll put them up so that you can enjoy a bit of Renaissance skirmishing. I haven't thought of a name yet though as Louis XII's badge was a Porcupine how about Porcupine Rampant?.... suggestions welcome !

All the best to you and yours this Christmas