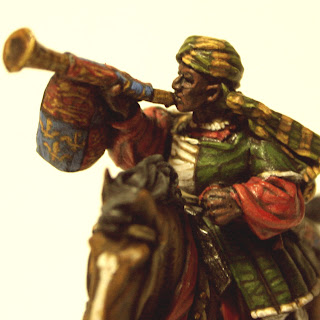 I have had plans to represent him for quite a while but I realised that a conversion would be in order as well as finding the right component parts. These initial musings and some background about John Blanke can be found in this previous blog post. 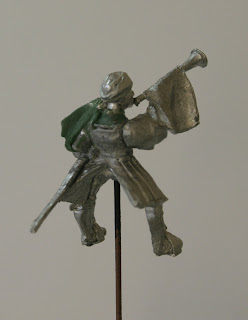 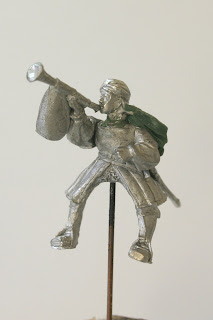 Acting upon your advice I settled in using an Ansar head from the Perry Miniatures Sudan range and proceeded with the conversion work; first the head was removed from the WF trumpeter and a hole drilled in the cavity, next I removed the Ansar head at shoulder level and filed it to fit snugly - this took a lot longer than I thought to get it exactly right. I then drilled the head and pinned it to the body.

The turban  had a trail which had to be cut and re-sculpted with green stuff once I was satisfied with the head placing.

I also wanted the trumpet to be facing to the right rather than straight forward as I thought it more dramatic and would show off the royal arms a bit better, so this required some filing and pinning too.  I was then left with the figure above, fully prepared and ready to go. 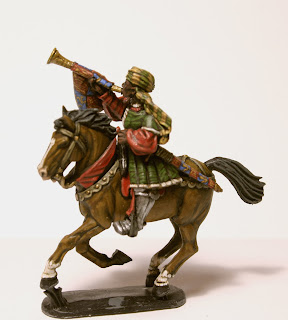 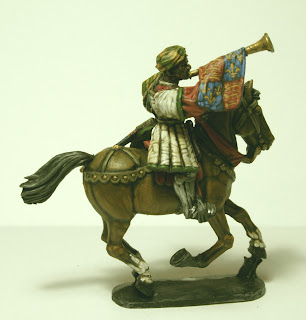 Below is one of two images of John Blanke which captures his role in the Westminster Tournament of New Years Day 1511. This celebrated the birth of Henry VIII & Katherine of Aragon's first surviving child, Henry, Prince of Wales who would later die on February 22nd. 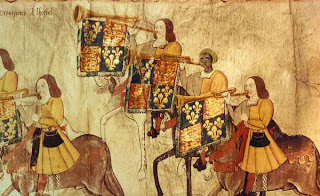 I used this image both as a starting point for the conversion and to capture the identity of John Blanke. In this image he wears yellow and grey livery (possibly Catherine's) and is happily ambling in relatively peaceful circumstances. I have painted him to represent how he may have looked in 1513, a messenger or dispatch rider, close to the King and his commanders﻿. 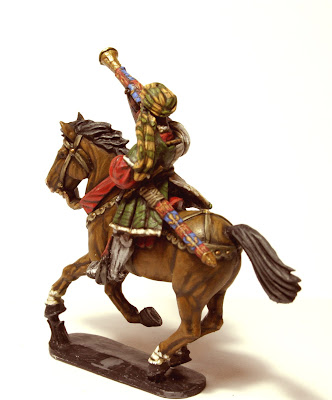 In March of that year Henry sent a force of 1500 archers under the Marquiss of Dorset to assist his Father in Law, Ferdinand of Aragon in his wars against the Moors. The expedition failed miserably as the force arrived too late to have any real impact and quickly succumbed to disease and dysentery.


Undeterred, Henry also sent a similar sized force to the Low Countries under Sir Edward Poynings to assist Margaret of Savoy and Maximilian I suppress a revolt in Guelderland. Henry's motive was to win Maximilian as a potential ally for his future war with France. The force was received well and proved very much efficient in reducing towns and crying havoc. The stage was set and Henry joined the Holy League in November of that year.

Next up, Blanke's accompanying horseman.