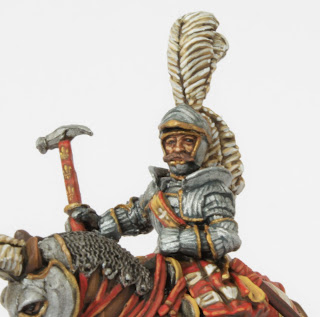 Here we have a much long awaited senior French Commander for my Army, Jacques II de Chabannes, Lord of Lapalisse. If he wasn't dead he'd still be alive*
For my interest he was one of the commanders of the French relief army sent to aid the beseiged town of Therouanne in 1513. He fought in the Battle of the Spurs where he was wounded, captured then managed to escape.
This Campaign has been the focus around which my collection has pivoted and it's interesting to then have the ability to open up other doors for how I can use it and this gentleman is no exception. 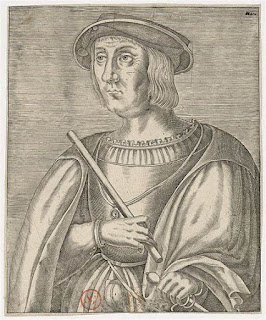 You can find a relatively brief Wikipedia biography in English here and a very detailed biography in French here for the latter you can translate sections as you read it.
It's a long career taking him through many engagements, lots of potential for games with this chap, his first and last engagements are as follows;
His first action aged 20 was in 1488 at the battle of St Aubin du Cormier where he was knighted for his valour in this engagement and shortly after in 1490 became a gentleman of  King Charles VIIIs household.
His final action was at Pavia in 1525 where as a Marshal of France he fought alongside King Francis I, he was part of the cavalry charge that cleared the Spanish cavalry from the park only to be unhorsed and finding himself fighting on foot against much lighter armed Landsknecht, Italian and Spanish infantry closing in from the adjoining woods.
After resisting for some time, Chabannes surrendered to a Neapolitan captain named ‎‎Giovanni Battista di Castaldo‎‎. However in the confusion a Spanish officer also hoped to seize him but furious that the Italian captain refused to share the ransom he executed Chabannes with his arquebus. 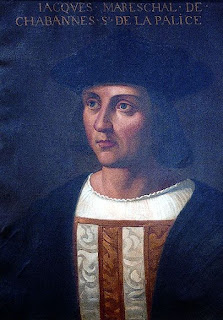 For the command group I used the Gendarme command figures from Wargames Foundry. These have long been a favourite and match the existing gendarmes I have in my collection.
The figures were originally sculpted by Michael & Alan Perry taking a lot of inspiration from the Triumph of Maximilian. This was a series of 136 woodcuts commissioned in 1512 by the Holy Roman Emperor Maximilian I. It was incomplete by his death in 1519 and the first edition of 200 copies was printed in 1526 by his grandson Archduke Ferdinand.
If you've not heard of it, I thoroughly recommend you have a look and ideally buy a copy in print. It's a great resource to have to get you in the mood for painting, the drawings are really characterful and inspirational.
I used this image from the triumph which depicts five horsemen in full armour for the tourney. The horse armour in particular is a good match for the figure. I used the diagonal pattern and border as a starting point for Chabannes' barding using his livery colours of red and white. 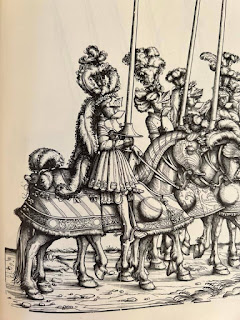 Yellow worked really well as a complimentary colour alongside the blue grey border. Using a magnifying visor was a must. It's been a while since I've done detailed work like this. My advice if you're doing bold stripes like this is to use a bigger brush to begin with, seems obvious but you'll have a lot more control over it and it's easier to paint in one action as a starting point. You can then switch to your usual brushes thereafter to neaten it up and apply highlighting. 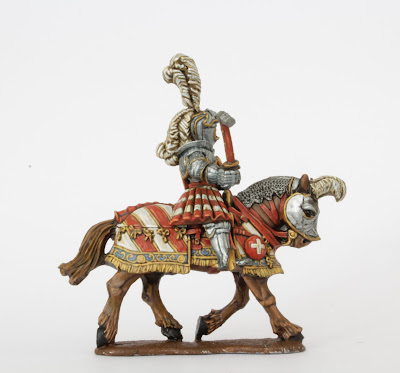 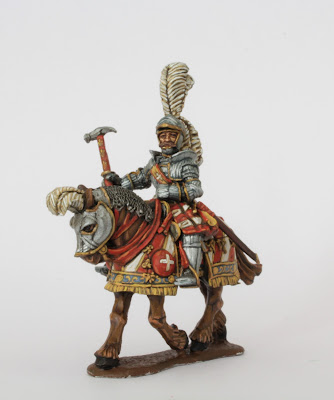 The armour was painted in Foundry 35A-C then given a light wash in a mix of Granite 31A, British Blue Grey 75A and water. When dry I then re-highlighted in armour 35C. This give a slight bluing effect which really makes it shine. 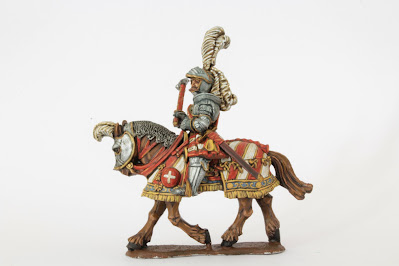 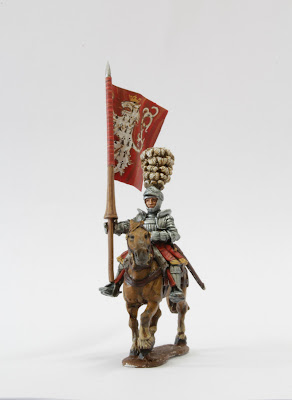 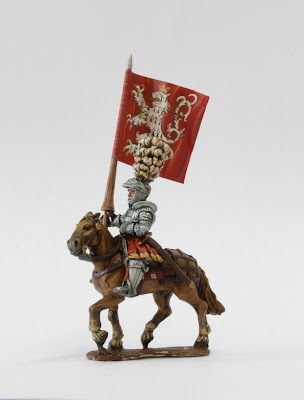 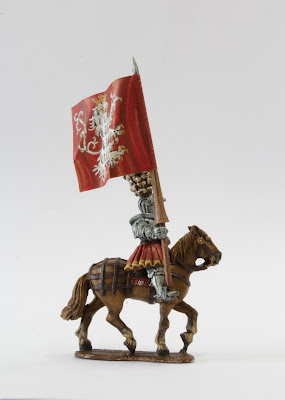 The standard was hand drawn. I marked up the area on paper, painted the background shade colour (foundry scarlet) then painted the lion freehand in the shade colour (foundry canvas) This was then highlighted in mid and highlight tone then the ermine pattern added. I then flipped the image on my phone to paint the mirror image of the other side. After that the fold detail was painted on then the banner was cut and fixed to the pole with a final highlight after folding. 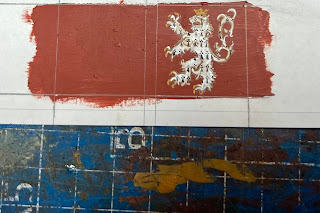 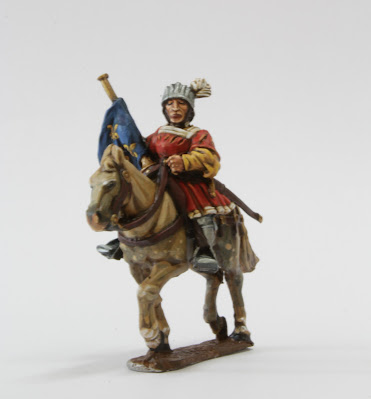 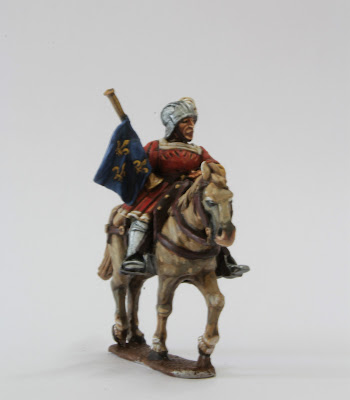 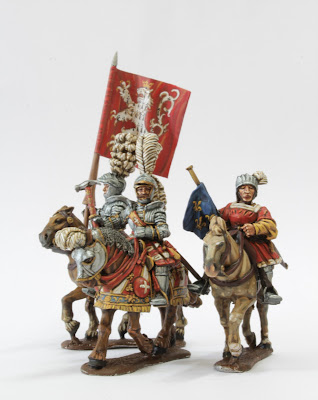 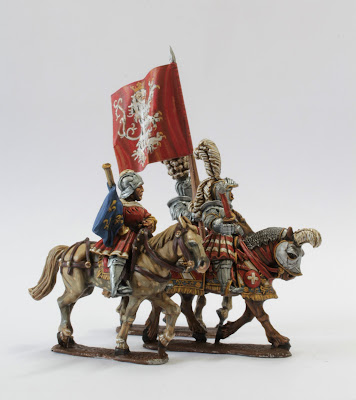 Here he is based up leading a lance of Gendarmes, Men at Arms and Archers. The bases on the cavalry needed some attention so it was a good opportunity to spruce them up a bit. This is a great finishing touch for my French cavalry and of course....I want to do more ! there's still a few French commanders present at Therouanne that need some attention, Bayard is very high on the list for that. 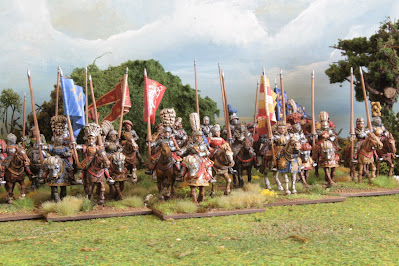 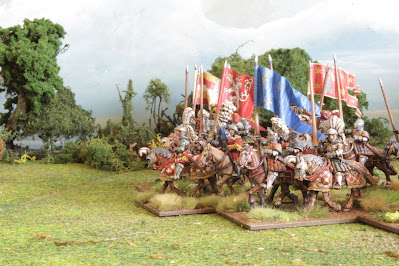 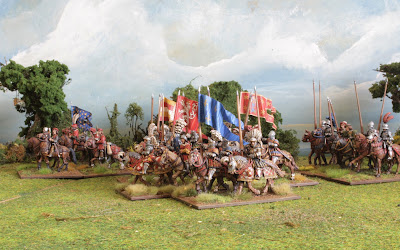 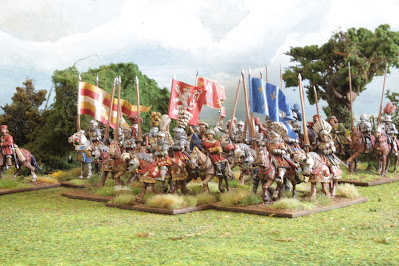 That's all for now, as ever i'm working on multiple things at present so i'll leave you guessing as to what's next.
Some brief parish updates;
I have written an article on collecting an early Tudor army for Wargames Soldiers & Strategy magazine, this will be in issue 119 April/May.
Also, if you are interested to see what i'm working on along with general discussion on the armies and enemies of the Tudor State then please join the Facebook group, Army Royal, all are welcome.
All the best
Stuart
*look up Lapalissade, you won't be disappointed
Posted by Stuart at 04:12