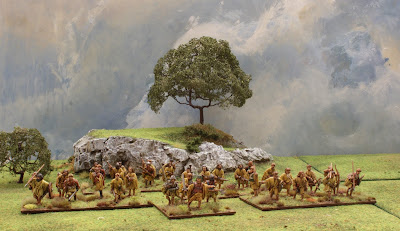 The latest figures join the ranks are a host of Irish Kern. I've been steadily painting them for a while and have reached a natural pause, these three units will be used in their own right as Irish or as auxiliaries for the Tudor English.

The figures are all from Perry Miniatures and bar a couple of head swaps are painted straight out of the box - a rather pleasant novelty for me !

The sculpting is really characterful and well researched, I really enjoyed painting them.

To begin I was keen to get a basic understanding of the clothing and found this short video from a re-enactor to be really useful and informative, have a watch now before continuing;

The term Kern comes from the Gaelic "Ceithearn" to describe an able-bodied free man performing military service. The Scots Highlander "Cateran" comes from the same source. These were the native Irish infantry and the most numerous troop type to be found in every Irish army. Henry VIII used Kern as auxilliaries to his Irish expeditions as well as in France in 1544 for skirmishes and raids. 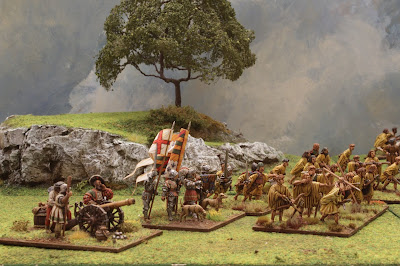 John Dymmok in  "A Treatise of Ireland" c.1600, described them as follows

"The kerne is a kinde of footeman, sleigh tly armed with a sworde, a targett of woode, or a bow and sheafe of arrows with barbed heades, or els 3 dartes, which they cast with a wonderfull facillity and nearnes, a weapon more noysom to the enemy, especially horsemen, then yt is deadly ; within theise few yeares they have practized the muskett and callyver, and are growne good and ready shott".

Though later this describes their main armnament (less musket and caliver for the earlier sixteenth century).

Kern are characterised by their long yellow shirts 'leine croich' and short jackets 'ionar' as seen in these two contemporary sources; 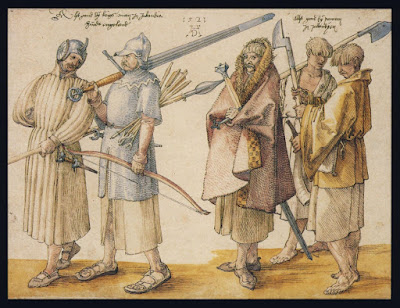 The earliest drawing of Kern from the sixteenth century was done by a Dürer in 1521. His picture is of five Irish soldiers he presumably met on a stay in the Low Countries, the accuracy of the equipment and dress suggests it was from life. One is wearing an acton (“cotun” in Irish) the other four are dressed in leine that reach midway between the ankle and knees. 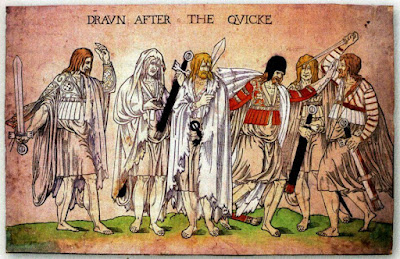 This anonymous woodcut titled 'drawn after the quicke' (from life) is dated to later in Henry VIII's reign and depicts a group of Irish men all wearing leine with very wide, hanging sleeves, and short 'ionar' jackets. In this illustration the leine are belted at the waist and then drawn up so that the hem is about the knees and the slack hangs around their waist as described in the video above, this may have been used as a pocket. The sleeves are narrow at the body and wide at the wrist, it is possible that these may have been used for parrying and were useful for concealing weapons and plunder.
John Derricke writing in 1581 describes Kern in this short verse;
'Their shirtes be verie straunge,
Not reaching paste the thie:
With pleates on pleates thei pleated are
As thick as pleates may lye.
Whose sleves hang trailing doune
Almost unto the Shoe:
And with a Mantell commonlie,
The Irish Karne doe goe'
The leine was a saffron coloured shirt made of strong, thick hand-woven linen with voluminous sleeves dyed yellow using saffron for the nobility and either less saffron or saffron mixed with lichens, poplar leaves and bark for those less well off. 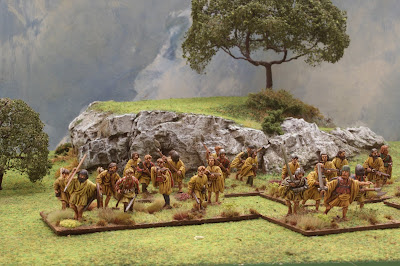 In the 16th century, the only colour mentioned is saffron or yellow. Some do not mention colour which  leaves open the possibility of other colours, but it cannot be doubted that saffron was the overwhelming favourite.
Saffron was grown in large quantities all over Ireland predominantly for this purpose and so much in use that local supplies were not enough and it was also imported from abroad.
The following abridged extract from an in-depth essay by the Wilde Irish re-enactment group adds some fascinating detail;
'Sixteenth century Irish men of war acquired a new saffron shirt once a year in anticipation of Christmas or Easter, so that the wearer might ‘go gay at a feast.’  We are told that ‘many times five marks’ * would be lavished on a single shirt in saffron dye and silk embroidery. To meet the formidable expense the kern would “rob out of churches or elsewhere . . . so that more robbery and felony is against such feasts committed as all the year following.”  For instance, O’Bierne and Kavanaugh “agreed to make a prey [rustle cattle] and with it get silk, saffron and cloth in Kilkenny.”  That would be one answer to the often asked question of how simple Irish men of war could have afforded such costly attire.
Newly dyed saffron gives a brilliant dayglow yellow of almost fluorescent intensity.  It cannot be matched by weld or any other natural dye.  It is also one of the only natural dyes that take readily to linen.  This helps explain its popularity at a time when such bright colors were not often met with.  It will fade with exposure to sunlight and washing, a fact which may explain why the Irish were said ‘seldom or never’ to wash their shirts.  On the other hand, shirts dyed with saffron were said to ‘continue long clean, and lengthen life,’ saffron having then a reputation as a preservative which it still retains, at least as regards food.  It is also clear that saffron was thought to prevent “that evil which cometh by much sweating and long wearing of linen,” i.e, lice.
So, having spent so much on his feast day shirt, the kern would proceed to wear it throughout the coming year, relying on the preservative properties of the saffron dye—rather than laundering—to extend its life.  At the end of a year’s time it’s not hard to imagine that the shirt would have hung  ‘in tatters’ and been ‘too torne.’  The fading of color over time also explains a later writer’s assertion that the gowns of the Irish were ‘yellowish, not yellow.’  Of course, linen garments may be re-dyed much more readily than woollen ones, and it is likely that references to shirts as such being ‘stained’ or ‘washed’ in saffron may indicate re-dying.'
*equal to around £2000 in today's money.
You can read the full article here. 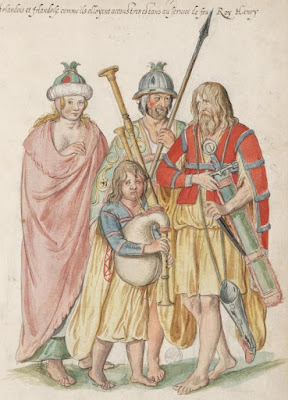 'Irish as they stand accrouted being at the service of the late King Henry VIII' by Lucas DeHeere, 1575.
For my interpretation I took this information on the dyes to mean that there would be a noticeable variation in colour on the leine from which one could denote the wearer's status. This in particular informed my painting style. 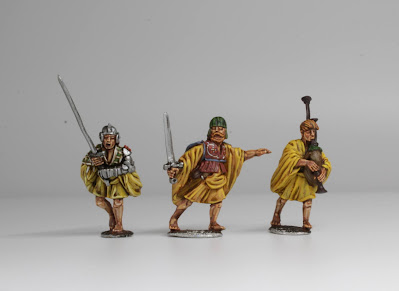 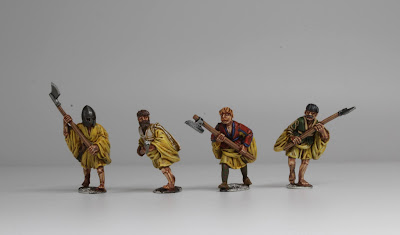 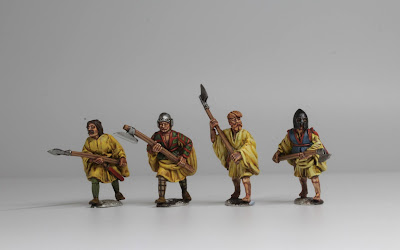 Kern with two handed weapons (2nd from left is a head swap)
For the commander  I used Wargames Foundry Deep Brown Leather light tone as a base to which I then applied a wash comprising;

I then re-applied the Deep Brown Leather Light as a shade tone followed by the Wargames Foundry Ochre triad with a final highlight of the light tone mixed with a little white applied sparingly.

The process was the same for the other ranks but I started with Ochre mid tone as the shade, a wash with less of the contrast leather added and a highlight of the Ochre light mixed with light.

I painted most of the figures in pairs with slight variation in the wash as I went for tonal variety.

As an aside, I generally paint using a shade wash on all figures and i'm always evolving this. I have found the increased pigment in the Citadel contrast paints work well when used as a component of a wash as described above. On their own it's too much. The Technical medium is essentially the same medium minus pigment but it has more body and reliability than just using water. Liquitex Professional matte fluid is the same and much cheaper though it comes in larger pots. 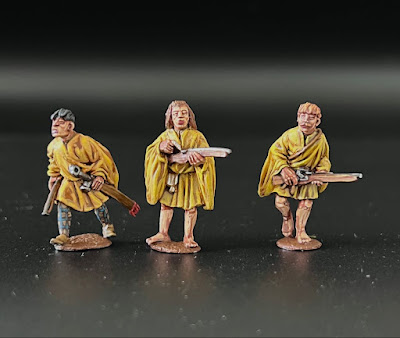 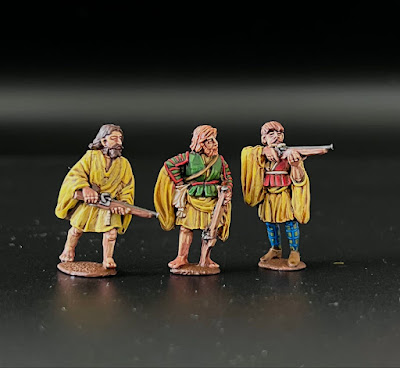 Kern with arquebus
The first record of handguns in Ireland dates to 1487 when Godfrey O'Donnell shot an O'Rourke at Castlecar. The earliest use in battle is Knockdoe, 1504 where a Dubliner is recorded to have killed a horseman with a handgun, arquebus balls have also been found at the site. The Earl of Kildare, Gerald Fitzgerald seems to have been responsible for the introduction of firearms to Ireland and ironically he himself died of a gunshot wound in 1513.
If you're interested to know more on the early history of guns in Ireland this article on JSTOR is a good read. You just need to register which is free and after that you can read up to 100 articles per month. 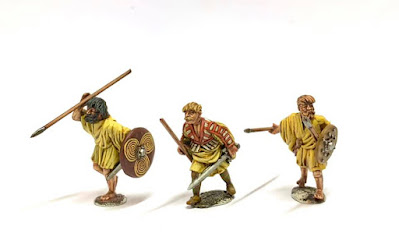 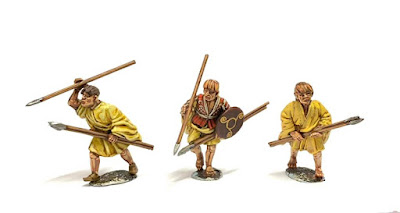 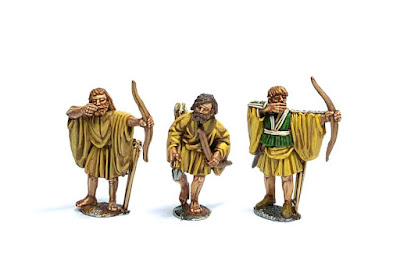 The Ionar jacket was made very short and with sleeves open on the underside to allow the large hanging sleeve of the Léine to fall through. The jacket body and sleeves were decorated with lines of piping or fringing, sometimes both. The most decorative had embroidered medieval style foliage or Celtic decoration.

I used the above 'drawn from the quick' drawing as my main reference with some left relatively plain and others with added piping and embroidered designs.

Some of the figures have hose on to which I attempted to paint as trews with mixed results, i think a couple need to be a bit more muted in colour but they give a pleasing result nonetheless.

I hope you enjoyed that brief study of saffron in miniature form. I really enjoyed painting these and having recently gamed with them they are a joy to behold on the table. I'm keen to add more at some point so I can field an Irish host, at present these comfortably add an auxiliary element to my Tudor army.

I have a few projects on the go at the moment so i'm not sure what the next post will be. If you can't wait for a complete article please join my Army Royal Facebook group for updates as they happen as well as discussions and articles on the armies and enemies of the Tudor state.

Bye For Now and all the best