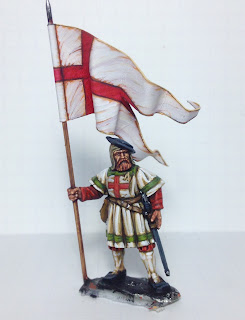 Here's the latest addition to my Tudor Army, a rather stout looking standard bearer.

This conversion follows what has become a fairly standard method for me; the use of an existing torso and legs as a dolly over which a base coat is sculpted ready for the addition of plastic arms, head and equipment.

I have usually used a plastic Perry figure as a dolly but this figure represents a rather interesting twist.

Oliver James of Steelfist Miniatures got in touch with me a while back for some assistance in finding Landsknecht source material for his latest Gendarmes & Landsknecht Kickstarter which I'm happy to say achieved funding today.

In putting the Landsknechts together Oliver first created some dollies in various advancing poses and he kindly sent me a set to experiment with.

These were a step up for me as the torso had to be built up which took a little while to master with trial and error. After a few weeks I had created the figure above, here's a pre-painted shot; 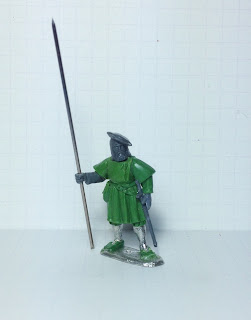 This tested my ability considerably but I was very pleased with the result, the only problem was that it took quite a while to do, as they all do. However with a metal dolly I now had the option to get something cast so with permissions sought that's what I'm embarking upon. 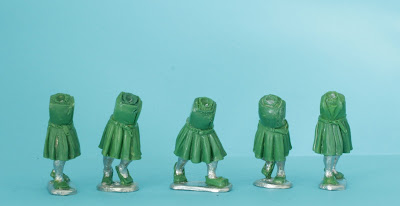 They're all wearing a skirted base coat with the exception of the last figure on the right which is in a jacket. Each has a belt and is wearing oxmuhle shoes typical of the period. The shoulders and head sockets are modelled to take the arms and heads from the Perry plastic sets.

Once cast all I'll need to do is add the arms, head, and sword, sculpt the top sleeve of the basecoat and they're ready for painting - this will save me considerable time in bringing my existing ranks firmly into the early sixteenth century.

As the dollies were in an advancing pose I built these figures up with the intention of using them as Tudor billmen; 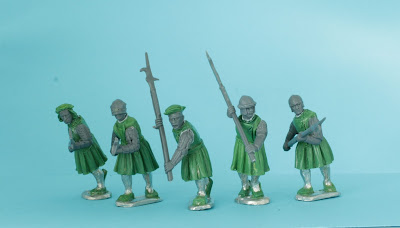 I'll be doing a fairly limited run initially to enable me to update my collection and we'll have to see what comes next, I'm already considering getting some standing dollies made to convert in the same way for Longbowmen.

Though these were not conceived as commercial there's always the option of getting more cast so let me know if that's of interest.

I'll have to see how they come out and paint up first but it's looking good so far.