I started work on this unit back in November and posted a brief WIP that you can view here to see more detail on the conversion process as well as an overview of what I believe to be first adoption of home raised pikemen in the Tudor period.

Since then I have created some sculpted conversions of figures without armour as well as the command. I also decided to paint the unit to represent some of the 900 English pikemen present in the retinue of Charles Brandon Lord Lisle during the French campaign of 1513. 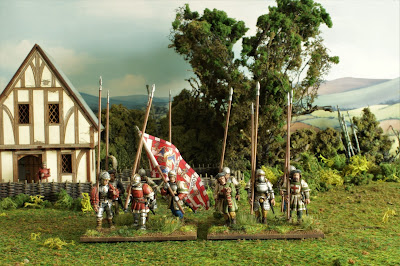 Here are some group photographs prior to basing; 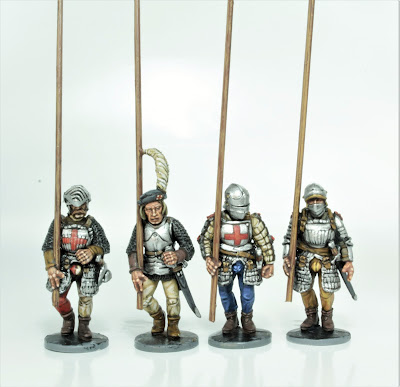 As mentioned you can see how I converted these pieces in the post linked above. They were fairly straightforward to paint being mostly armour though I did paint field signs on the breast plates of two of the figures as was common throughout the Western European armies at that time. I particularly like the way the face turned out on the figure second from the left as well as the St. George badge on his cap. As is my formula for figures in caps the head is from the Perry Miniatures Ansar box with hair cut away and the top of the head cut for the sculpting of hair and a cap thereafter. They're really nice heads and worth getting a box just for this process, there are quite a few useful arms in there too and I have also used some of the bodies for other sculpts. 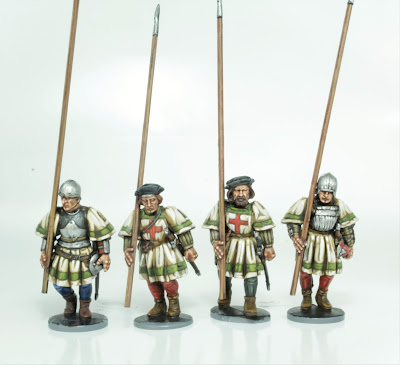 These were all sculpted conversions to represent the Tudor base coat, and in two cases I have added a breastplate. It's not clear in this photograph but they each bear a lions head livery badge of the Duke of Suffolk on their left shoulder which you can see on the command figures below. Unfortunately I forgot to take a photograph of the completed sculpting prior to painting but you can see the same process on the figure below; 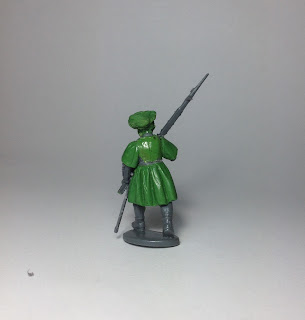 Essentially I use the Perry figure as a dolly and sculpt the coat on top, the process took me a while to master but once I developed a technique I've found I'm able to turn them out at a reasonable pace. 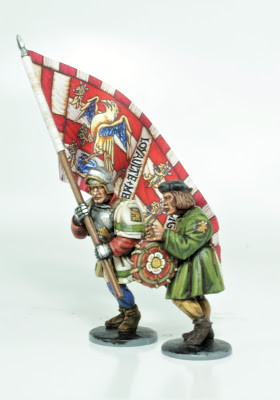 These figures were enjoyable to put together and an opportunity for some interesting details. I opted to model the musician with a sleeved jacket rather than a base coat for a bit of variety and painted a Tudor Rose badge on both sides of the drum. The head is from the Ansar box converted as mentioned above.

The banner bearer carries Brandon's swallow tailed livery banner, my first use of a flag from Pete's Flags range of Tudor flags and banners. Quite a good feeling as I helped Peter put this range together and through that I hope it's helped to spread this early Tudor obsession of mine. The detail on this is excellent and printed to a very high standard, apart from anything else it was quite a relief not to spend a couple of days hand painting a flag !

As with the lighter armoured figures in base coats each of these bear the lions head with ducal coronet livery badge of Charles Brandon. These also feature on the banner and were adornments throughout Brandon's household such as the terracotta fragment below from his residence at Suffolk Place, now in the V&A collection described as;

'This relief fragment in cream coloured terracotta formed part of a decorative frieze at Suffolk Place, Southwark, the palace of Charles Brandon, Duke of Suffolk, brother in law to Henry VIII. This and other reliefs were excavated on the site of the house in 1937.

Suffolk Place was a vast house built between 1518 and 1522 by Charles Brandon for his wife Mary Tudor, sister of Henry VIII. It is the earliest example of a Tudor courtyard house known to have carried this type of extensive terracotta decoration. This use of terracotta quickly became fashionable and appeared on other buildings commissioned by Henry VIII's courtiers, including Cardinal Wolsey's York Place (later Whitehall) and Hampton Court Palace.

The relief is made of moulded clay that was dried and fired to create terracotta (literally 'cooked earth'), a material suitable for use as external decoration. Although building projects such as Suffolk Place were on a vast scale, by using a cheap raw material and a reproductive method of manufacture the buildings could be decorated economically and speedily.' 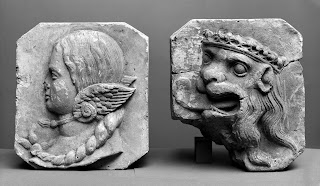 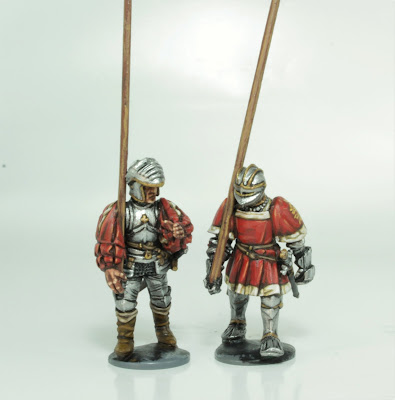 I think I had the most fun creating these two as a mini vignette within the unit. As this unit was unique I reasoned that a Burgundian or Flemish mercenary captain may have been employed to maintain formation and pike drill. Here he converses with an enthusiastic noble on the use of the weapon.

The Captain figure was rather tricky, it's a fairly straightforward assembly using the parts in the mercenaries box with the addition of sculpted puffed and slashed arms and a bellows visor (a press mould from a Wargames Foundry gendarme). It was quite hard to get the arms both looking to be of the same cut, the left arm in particular had 2 or 3 attempts.

The noble was an interesting conversion. I wanted to represent him in the latest Flemish armour with a skirted coat. To begin I started with a figure from the Foot Knights pack as a dolly for the coat which required quite a lot of filing and cutting prior to sculpting. For the arms I trimmed down pieces from the Foot Knights and WOTR command frame.

The right arm proved to be a test of my ability as I had to cut away the forefingers of the gauntlet and re-model it so that it held the pike. In doing this I also modelled Maximilian style fluting on this and the other gauntlet as well as on the corselet where it meets the helm, hopefully these additions are easier to see in this photograph prior to painting. 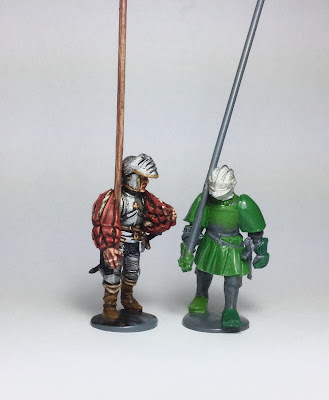 The helm is from the Steel Fist range of mounted early Renaissance knights, these packs come with a variety of separate heads and I couldn't resist using one of them. Lastly I remodelled the feet as contemporary bear paw style sabatons; 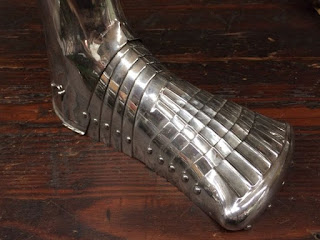 I painted the noble fairly plain settling for him representing part of Brandon's household rather than Brandon himself who I hope to model on horseback at some point. 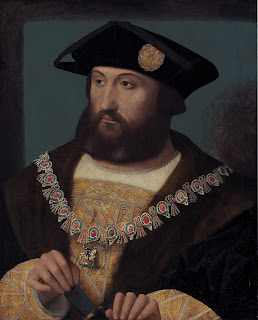 Charles was Henry VIII's brother in law and perhaps his closest personal friend. He was the son of William Brandon, standard bearer of Henry VII, who was personally slain by Richard III at the battle of Bosworth Field 1485.

Charles distinguished himself at the sieges of Theouranne and Tournai where he served as high marshall (deputy commander) as well as having charge of 3200 men within the middleward of the King.

He later served as Commander in Chief during the campaigns of 1522 and 1523. You can read more about his life here. 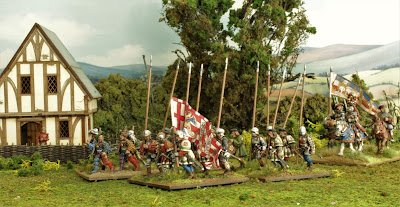 To close, this unit represents a continuation of the modernisation of my existing Tudor army in replacing existing figures with those in more contemporary dress now that I'm able to do it. It's a slow process and in some ways seems a bit futile as I get a zero net gain (I'll sell the units I replace) but the results speak for themselves and give a much better look - I hope.

So my stretch goal this year will be to at least replace the bill in my army and work on the archers next year. I may keep some of the older figures to represent troops from poorer magnates but this is the format my Tudor projects will take for the foreseeable. I think another two bases of pike would be good to bulk these out a bit though as things stand they're right in terms of the proportions of the army.

I will of course keep on with the French, I think I'll alternate between the two to ensure I've got forces to fight against as this project enters the wait for it.... ninth year !