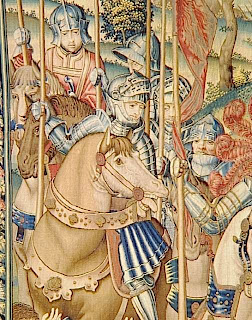 Well here we are, this feels like the end of a very long journey !

I've been striving to get this unit just right and, as I'm finding with this army, that has meant a lot of conversion work and scouring of books and the web to create a result that I'm happy with.

The nucleus of that notion began here with an essay of  my understanding of the French lance of the early 1500's; essentially the gendarmes were the easy bit, I really wanted to try and understand the organisation of the Ordonnance Archers.

Unfortunately I didn't reach a conclusion of any certainty, I found source material of lance composition in the late 15c and from the late 1520's so I went for something in the middle.

Once I had a reasonable idea of where I was going to go I focused my efforts upon trying to find some images and the key source was a series of Flemish tapestries of the early 1520's depicting the story of David and Bathsheba, as discussed in the previous blog post, for ease here's the main source of inspiration; 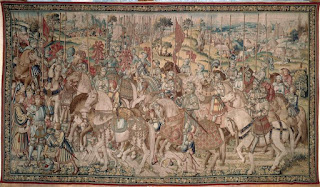 This piece entitled 'rassemblement des chevaliers' shows cavalry in a progress with a mix of heavily and fabulously equipped gendarmes alongside men at arms in older armour and lightly equipped coustilliers, no archers unfortunately but an interesting mix of arms and armament.

In my effort to replicate the processional nature of this piece in some way I have opted for the Wargames Foundry horses, they're a bit smaller than the Perry plastics but not that noticeably. I think i'll no doubt have a more active unit of archers and gendarmes in addition to these.

Perhaps unsurprisingly there are very few appropriate figures out there, some manufacturers have made an effort to give a nod to the French Ordonnance Archer though perhaps because of the evolving nature of them I did not find what was available to be either relevant or at the standard for what I wanted to achieve so the next challenge was to muster my rather infant skills of sculpting and converting to see whether I could do it any justice.

So with the brief of sculpting something with no real certainty as per the research and images in mind I arrived at this conclusion;

Here we have men at arms alongside mounted archers and a coustillier (in blue) thrown in too. I've mixed them up a little basing wise to emphasise the variation. In saying that the men at arms are a bit more of a definite thing and It's no leap of faith to imagine these forming the second line of a charge behind the gendarmes. 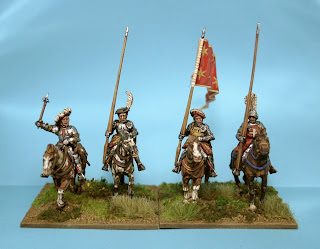 As for the archers, from the many months I've been putting this together I have no doubt that they were facsimiles of their English counterparts - scouting, mopping up and in something of a dragoon role on the battlefield. The coustillier, combatant or not depends on interpretation but I felt I couldn't neglect to show one. 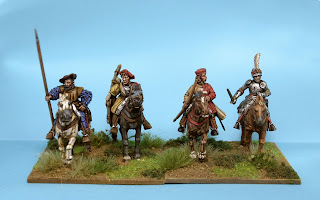 The other aspect that I have tried as far as sculpting goes is to emphasise the status and role of the figures in the group; the men at arms have skirts fitted to their armour, within which I have sculpted a simple skirt as well as short and long skirted coats, the standard bearer is perhaps the most wealthy with decorated and slashed coat. This as opposed to the more uniform issue base coats of the archers and the coustillier in his own reasonably well off clothes and a slashed leather jerkin.

This unit has taken a few months to come together, the men at arms were sculpted quite a while ago whereas I sculpted the archers fairly recently, it's probably my critical eye but I can see that there is a difference in my ability over that period. I have been sculpting this week and it certainly feels like I have increased that a few steps again. It's certainly something that gets better and easier with momentum, I suppose it's the same with painting but I do find that when I have a break for a while I have to re-learn a few tricks to achieve the results I want. 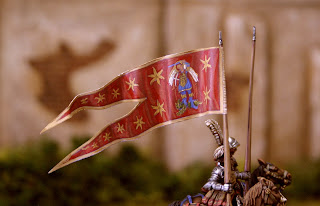 I went with just a single banner for these, I'll definitely add more as I'd like to carry on with more figures on this theme. The image on the banner is a mix of a number of contemporary sources; St. Michael from this painting on wood panel from the late 1490's, something also replicated fairly closely in images from 1507; 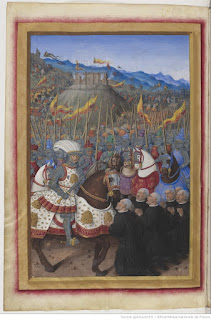 I then added star emblems which are fairly generic of French symbolism around this time. I opted for a simple red background to differentiate this unit from the Gendarmes which will have the parti-coloured banner with St. Michael and Louis XII's porcupine (also shown above). As with all of my banners this was hand painted.

How on earth you'd wargame with this 'unit' I really don't know ! ha, another reason that I don't really game that much, perhaps that gives me a little more freedom to really try hard at depicting a historical representation. Though I suppose you could vary their use as your whim or scenario required.

There we are, I could be entirely wrong but it's my best shot, I hope you've enjoyed the journey as much as I have !

Next up, some Gendarmes, four to be precise to complete the proportionate representation of the 1513 French lance. 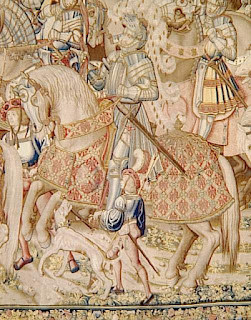 Oh go on then, here's a sneak peek at the initial progress with the points of reference below; 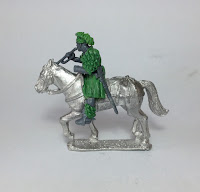 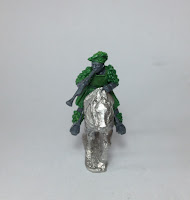 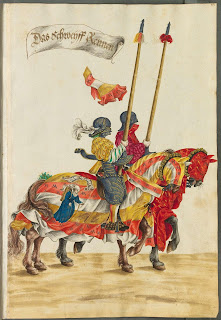 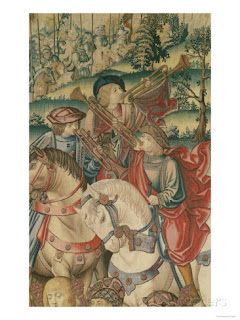