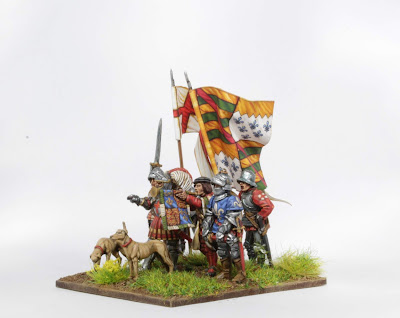 My bias to the Tudor army continues with the addition of Sir Edward Poynings and other nobles.

This was somewhat influenced by a forthcoming game with Oli which will feature action during the 1511 siege of Venlo. He took a retinue of 500 men to France in the 1513 campaign so he also fits neatly into my army. 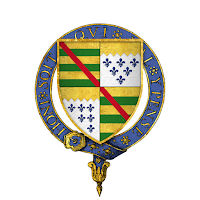 Poynings was something of a career soldier, born in 1459 he declared for the Lancastrian cause and was implicated in an attempted rebellion under Edward IV. He fled to Brittany to join Henry VII and returned with him where he would fight at Bosworth in 1485.

In 1492 Henry VII sent soldiers under Poynings to aid Maximilian quell a rebellion as the said rebels were fitting out ships to prey on English commerce. Poynings cleared the sea of the privateers and then assisted Maximilian's forces lay siege to their stronghold at Sluys. Later that year he served in Henry's little known and short lived invasion of France following which in 1493 Henry appointed him as Governor of Calais. His next military appointment was as Lord Deputy of Ireland where Henry sent him to repel Perkin Warbeck and his Irish supporters.

He was regularly employed in military commands and diplomatic missions by Henry VII and VIII. His most important diplomatic mission alongside Sir Richard Wingfield was the successful negotiation of the Holy League alliance in 1513. He died in 1521.

He certainly led a full life and there's a few ideas there for gaming various aspects of his military career.

As I mentioned the focus for this unit was the Venlo campaign. In 1511 Henry sent 1500 archers under Poynings' command to aid Margaret of Savoy against the Duke of Guelders. The English acquitted themselves well in this venture and a grateful Margaret issued the returning soldiers with coats of red, yellow, green and white combining the Tudor livery with her own - wouldn't that be cool to represent!

Over to the figures.

I considered creating a unit of archers with Poynings at their head but my army has no shortage of those so I chose to have him alongside other Tudor knights. 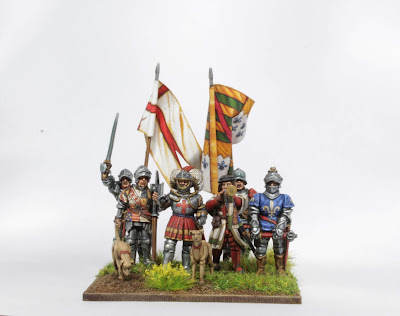 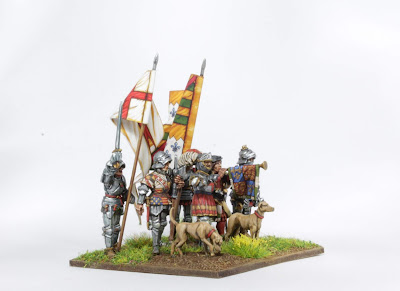 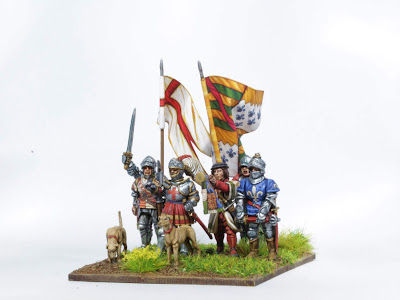 As with the rest of my collection I made a conscious effort to use figures in both up to date and earlier armour as this typical composition lingered on in England for much longer than in Europe with only the richest of nobles being able to afford the latest armour from the continent. This juxtaposition represents a snapshot of knights and their equipment in the development of the early Tudor army.

I wanted to see if Poynings was accompanied by any other nobles for the Venlo expedition but I couldn't find that much so I chose the aforementioned Sir Richard Wingfield which was a real challenge for the eyes; 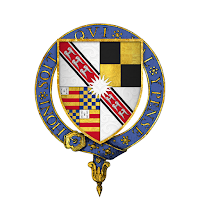 However for further inspiration Oli found this reference in Hall's chronicle;

[Henry VIII] 'appointed Sir Edward Poynings, knight of the garter, a valiant captain and noble warrior to be the lieutenant and conducter of the said 1500 archers which accompanied with Sir Matthew Browne, Sir John Digby, Richard Wethrill and diverse tall gentlemen and yeomen well known and tried.'

I had Digby's heraldry so he was to be the second knight in a surcoat.


It was fun choosing the figures and getting the base just right, I'm really pleased with how the unit looks and works to the narrative. 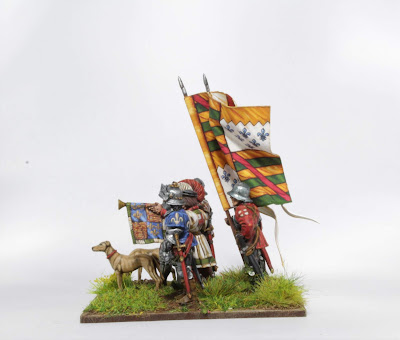 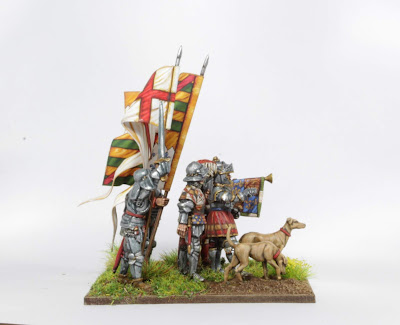 Here are the figures in individual detail.

First up here's Poynings in the latest continental armour along with some hunting hounds. The figures are from Steel Fist Miniatures and were a joy to paint.

For the armour on all figures I used the armour palette from Wargames Foundry followed by a light wash of deep blue mid tone mixed with granite shade. When dry this was re-highlighted with the armour light tone which really sets it off with an almost polished finish. 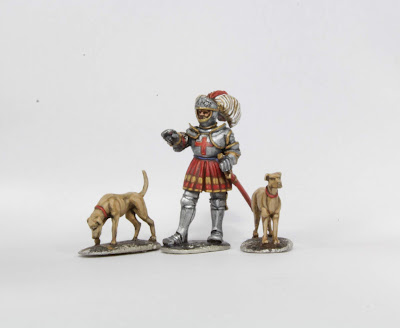 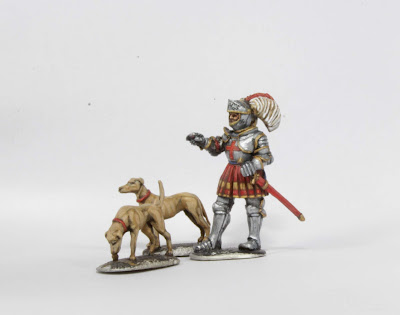 Poynings is accompanied by two more nobles below; Sir John Digby on the left and Sir Richard Wingfield on the right. Both men were seasoned soldiers who also began their military careers on the battlefields of the Wars of the Roses. 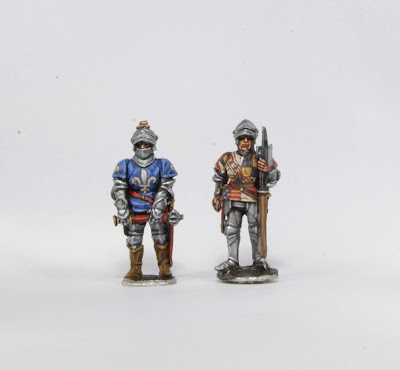 Heraldic surcoats feature on tombs and church brasses into the 1540's, most feature the complex quartering of the Tudor age however finding that Digby's heraldry was almost plain in comparison was most welcome ! 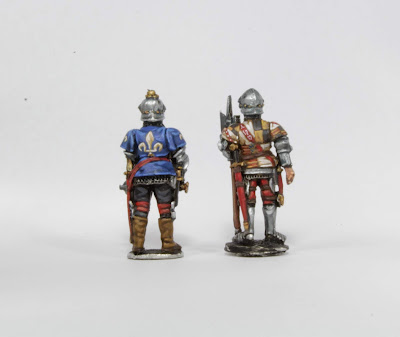 Both figures are from Perry Miniatures War of the Roses range. 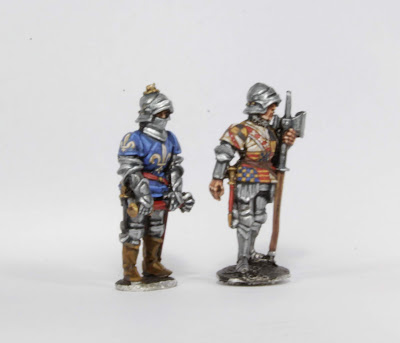 To bring further colour to the unit I added two banner bearers; Poynings on the left and England / St George on the right. Both Perry Miniatures. 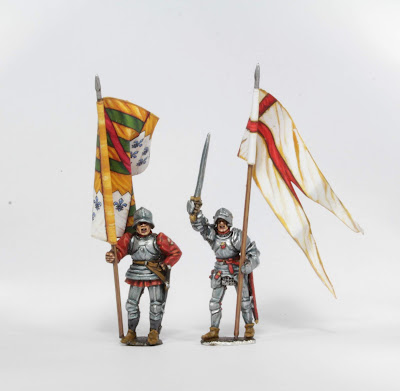 Banners are from Pete's Flags, they really are excellent works of art in their own right. You can get in touch via his blog and/or find his range on Ebay. 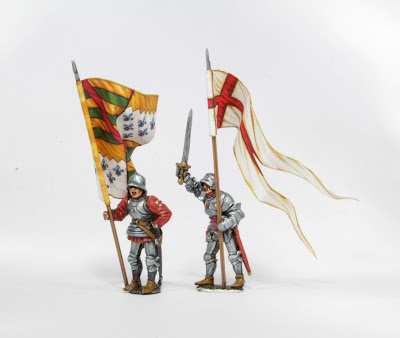 Last but not least is a trumpeter of the Royal Household. This is a conversion by sculpting a base coat over the body of a Warlord Landsknecht with the arms from the Perry WOTR set and an Ansar head. The coat was sculpted. 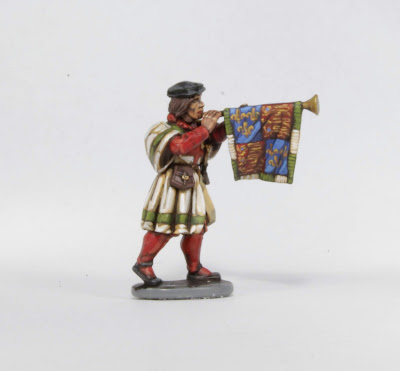 I painted this figure last year and this unit was a great opportunity to put it to use. 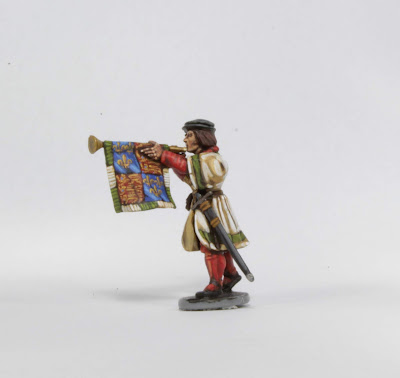 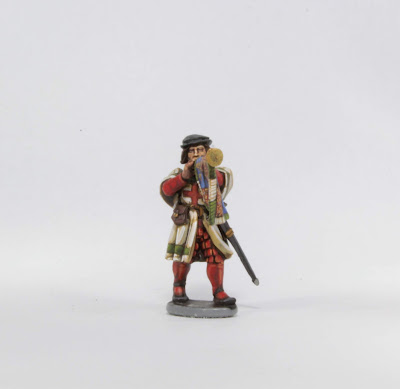 It's been fun putting this unit together with so much colour, armour and heraldry. I'm presently working on another building which will hopefully be done soon. It's been quite a creative few weeks for me.

Oli will no doubt be putting more information about the siege of Venlo on his blog after our game at the end of the month so keep an eye out for that, I'm certainly looking forward to it.